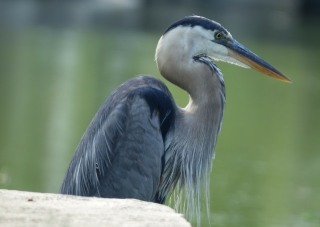 I’ve been taking pictures for as long as I can remember.  At some point during my childhood, I assumed the role of family photographer — beginning with Brownie Instamatic and Polaroid cameras.  I mainly took pictures of my family growing up, but in adulthood I branched out to street life, landscape, wildlife, and other subjects.

I recently sold my year-old camera equipment on ebay (my fourth or fifth camera system that I sold on ebay over the years), to purchase a Sony DSC-RX10 III because of its longer focal length (which allowed me to zoom in closer for wildlife photography).  I was getting used to and practicing with this camera when I encountered The Heron.  He was in the water close to the pier in a nature preserve – the closest I had ever been to a heron.  I actually captured some beautiful images of him.  In fact, one of the images was a potential award-winning shot.

My typical routine is to back up the photos from the camera’s sd (memory) card onto an external hard drive, then delete the photos from the sd card while it’s in the computer.  With the Sony, I noticed that when I put the card back in the camera I received a weird error message about some images not being able to be displayed.  I thought the only way to delete that error message was to reformat the card while it was in the camera.  While I was working on this project, I also was backing up photos from other sources.  In other words, I was doing too many things at the same time rather than fully focusing on this project.  It was also late at night and I was getting tired.  Consequently, thinking I had backed up these images onto the external hard drive since that was my typical routine, I deleted the photos from the sd card and reformatted the card in the camera.

The next day when I went to email my favorite heron image to my sister, I discovered it wasn’t there.  I searched on my computer’s C: drive, on the sd card, and on the external hard drive and, much to my dismay, I could not find any of those photos.  I spent hours searching the Internet and downloading programs so I could recover the photos, to no avail.  Why I didn’t double check to see that the photos were backed up before I deleted the images from the card (again, something I would normally do), I’ll never know.  I also learned later that I could have recovered the photos had I not reformatted the card.  To top it off, I’m leery about using cloud-based applications, which is unfortunate as I would have been able to recover the photos this way.  Note – if you do a quick reformat with the card in the computer, you might still be able to recover the photos, but definitely not if you reformat the card while it’s in the camera.  But this is still not the Lesson of the Heron.

I usually don’t become emotional about anything in life, but I was actually emotional when I finally resigned myself to the fact that I had deleted those images for good.  After trying to calm myself with Reiki and meditation, I realized that I had been too attached to those photos (ego) – and this was The Lesson.

Ever since this experience, I have become much more humble when I take photographs.  Rather than trying to ‘capture’ or ‘captivate’ nature with my camera, I approach my photography the same way approach the animals when I offer Animal Reiki:  I am open and have no expectations about which animals or other nature subjects will present themselves to me.  When a bird, insect, flower, animal, etc. appears, I ask permission to photograph them (if they remain in one place long enough for me to photograph them, I feel they are allowing me to photograph them, which is a way of allowing the animals to take charge).  If I’m hoping for a certain subject to appear, rather than being disappointed because I did not encounter this animal, I am really grateful for any creature who presented him/herself to me and for all that I experienced that day, and I express my gratitude to the animal, bird, insect, flower….

Reiki has become a way of life in many aspects, and now the Animal Reiki ethics have merged into my photography.  Letting go of the ego is never easy, but it’s part of the path to reconnecting with the Great Bright Light that is within us and surrounds us all.  In an effort to enhance the connection with the Oneness of all and create a ‘Reiki space’, I now softly chant some of the Reiki mantras when I am out in nature.  I am so grateful that I encountered The Heron that day and for all that he has taught me.  Thankfully, I went back to the preserve a couple of days later and – lo and behold – The Heron was there to connect with me. 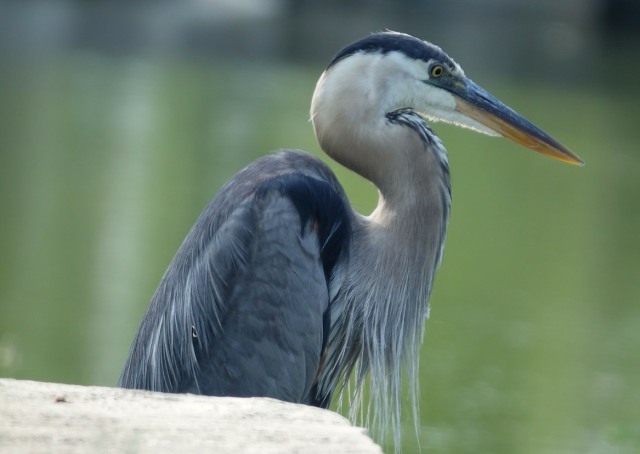