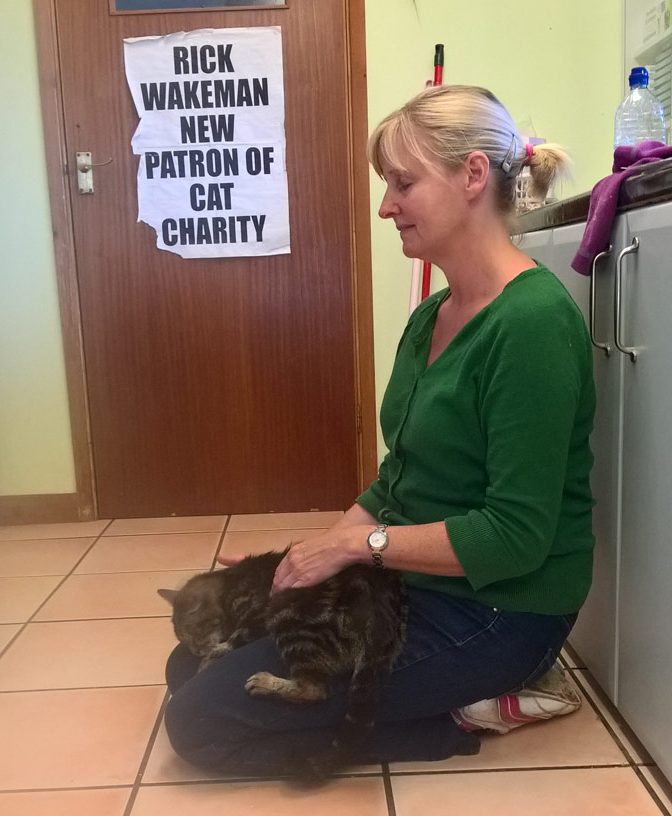 On my first visit to volunteer at Feline Care Cat Rescue in Norfolk, where there are around 150 cats in residence with a large feral/semi-feral colony of approximately 50 cats, I was given a five star welcome by a tiny cat called Tilly Billy. He had come in as a feral and was unable to be sexed by the Vet due to his feral nature. Due to his size he was thought to be female and called Tilly but after a few months Tilly became Tilly Billy when he was finally able to be handled and then neutered.
On my second visit Tilly Billy had seen the Vet and been diagnosed with a number of tumours. At this time he was no longer able to roam free on site as he needed to be monitored. I went to see Tilly Billy and his new roommates, Bourneville, Wendy, Babs and Bibi one afternoon and share Reiki with them. All these cats are either elderly or have health issues that are monitored. It was a lovely sunny afternoon and some of the cats were stretched out on a sofa while others were dozing in their beds. I sat with them quietly and went into the meditation space with Kathleen’s rose of light meditation. From the moment I connected there was such a beautiful feeling of peace and serenity. After ten minutes or so I heard the sound of purring and opened my eyes to see that Bourneville and Tilly Billy had turned to face each other with their paws interlocked and they were softly purring away. It was a beautiful sight and energy to be in and my heart opened so wide sharing in the love between these two sweet souls.
From time to time Bibi, a pretty ginger and white cats would walk over to me and softly head butt me, she was a little shy but she was clearly expressing her joy at the Reiki and seemed keener on human contact than the other cats. She did this on a number of occasions and again just before I left at the end of the session, such a sweet and gentle cat that left a paw print on my heart that afternoon.
Everything was very quiet and peaceful when all of a sudden I was temporarily startled by a loud noise and I opened my eyes to see Bob the goose, standing in front of the wire staring straight at me, I understand that he had originally arrived at the rescue with his mate but was now alone apart from his rooster friends who I have since found out also enjoy Reiki. After he had alerted me to his presence he stood quietly for ten minutes or so and then went off when he was ready.
This first afternoon with these senior cats was a beautiful experience and I felt blessed to have shared this space with each of them. I continued Reiki distantly for them in between my visits and each time there was so much love flowing back and a feeling of complete acceptance.
On my next visit Paul, who runs the Rescue together with Molly, told me that Bibi has passed away and that a volunteer had found her curled up in her bed having passed peacefully in her sleep. She had not shown signs of illness and it seemed had chosen her time to pass. For a moment I felt sadness, which I realised was only for myself. I realised what a true blessing it was for her to have had such a peaceful passing cosy in her bed and surrounded by her friends. I trust that the Reiki played whatever part it needed to in her journey and I feel gratitude for being able to share love with her.