It is six months since I got back from TOLFA and the experience is still very much part of my daily life. My time in India sharing space with the amazing and inspiring animals at TOLA brings me many gifts even now that I am home. I still connect to the animal and human friends I made while I was there through Reiki meditations, which reminds me that the bonds of love are beyond time and space and continue to grow and strengthen.

One of the dogs I shared a particular connection with while I was at TOLFA, was Tom, an older Collie, who had some of his bottom teeth missing and was at TOLFA because of a shoulder wound. When I first met Tom he was howling at the top of his voice and was clearly unhappy about having to rest until his wound had healed.

It took a while for Tom to settle but when he stopped howling I think all his kennel mates breathed a sigh of relief. My bond with Tom grew each day as we shared a space of love and compassion together and the occasional biscuit! I remember feeling worried about leaving Tom, probably more for me than him as he would soon be going back fully recovered to his territory and care taker. That night I dreamed that Tom was already home and was very contented. I was viewing him in his home surroundings but I was not part of it and it felt perfect. That dream brought me so much comfort and I knew Tom was sharing his wisdom with me. On our last day together at TOLFA I settled in front of his kennel hoping I would not allow my emotions to get the better of me, immediately I felt a wave of calm and we connected through Reiki. When I walked out of the kennel that day I knew this was not the end but a new beginning.

I regularly connect to the animals at TOLFA as a group but often during meditation or when I do not expect it Tom appears and we share the space of love and compassion that we are both so familiar with and that always brings so much peace and gratitude. 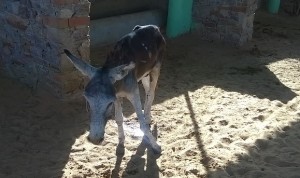 Another animal I was blessed to spend time with at TOLFA was a very special elderly donkey, who we called donkey senior. He had clearly been over worked and had been found by the side of the road unable to get up when he was brought to TOLFA. This amazing donkey was so grateful for his short retirement time at TOLFA with regular meals, fresh water, other donkey companions and love, attention and medical care from the staff there. Although he was very tired when we met him he had so much that he wanted to share with us. The sense that he was a very strong and hardworking donkey when he was younger came through and he felt so much pride in that and never the least bit sorry for himself even though he had clearly been over worked and for longer that he should have been. After sharing Reiki for almost two weeks senior donkey made his journey over the rainbow bridge, it was just his time and he was peaceful. There was complete acceptance from this beautiful and wise soul. Donkey senior has connected with me during my dreamtime since I returned home and when I need extra strength he pops into my consciousness and I am reminded of the gentle and loving way in which he showed the qualities of inner strength and finding that reserve you did not know was there.

This week I was blessed to do my first Reiki treatment of the year outside in one of my client’s gardens. It was a beautiful day and my elderly dog client was ambling around the garden enjoying the Reiki as she did so. I could feel her openness to the Reiki but as she did not settle I caught myself thinking it unusual, at that point one of the cats from TOLFA appeared clearly in my mind, he is a handsome ginger and white cat, who would always sit surveying everyone from the cat cabins. He was just staring at me, reminding me to let go of my expectation and trust everything was perfect.

My journey with the beautiful animal teachers at TOLFA continues and I know we are always just a loving thought away from one another.