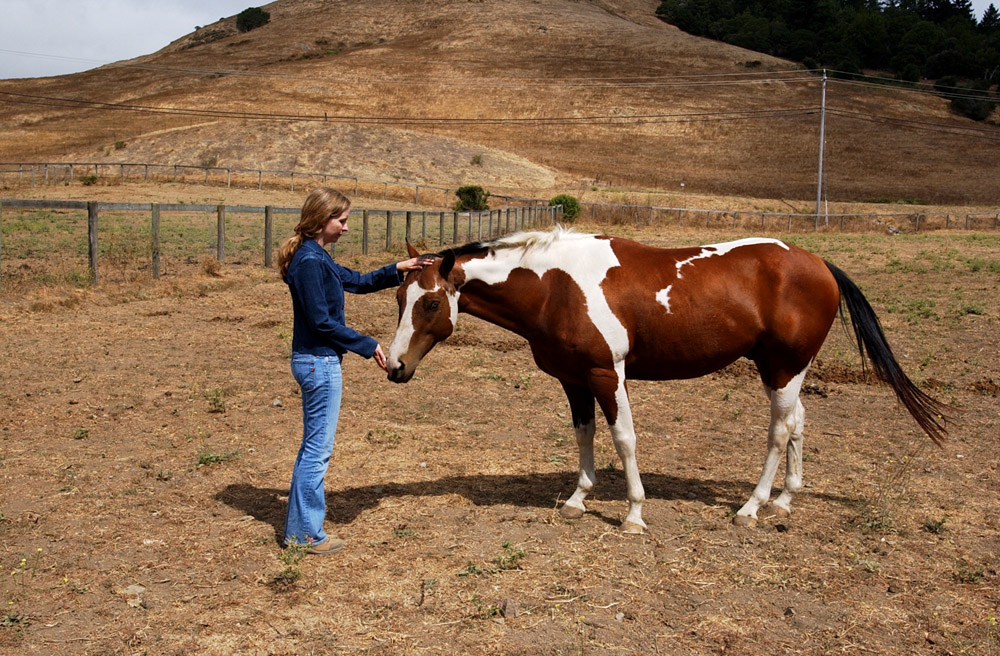 By Jodie Brenner
Note: first printed in Central Oregon Family & Pet News, September 2009
I just completed a three day Karuna Reiki® Master/Teacher workshop in Sedona, AZ and headed up to
Flagstaff for a couple of days. While sightseeing one afternoon I passed the Humane Society and next
thing I knew I was in the parking lot. Like most people that visit shelters, I want to take them all home.
As I was walked into the dog area I was overwhelmed by the barks, howls and cries. A part of me
wanted to run out the door and leave, it was so overwhelming, but I knew I stopped there for a reason.
I noticed how big and well kept the kennels were, but the dogs were still in frantic mode. I quietly
walked around and after several minutes I saw a border collie, she was obsessively running from the
front of her kennel to the back wall and jumping up the wall, and then would run back to the front. She
did this repeatedly and seemed to have an unlimited amount of energy and no desire to stop. I stepped
back from her kennel about 4 feet to give her space and knelt down. I begin to offer her Reiki; I could
feel she was accepting it as my hands were hot and pulsating. After about 7 minutes she stopped
running and jumping and stood at the back corner of her kennel looking at me, she appeared to be
calm and peaceful. A few minutes later she lay down and placed her head between her front paws
while letting out a huge sigh. Still she continued to look up at me with very soft eyes; she then took a
couple of deep breaths and closed her eyes to sleep. I realized at that moment the entire shelter was
silent, all the barks, howls and cries had stopped. I could feel a surreal peacefulness. This lasted for
several minutes until a door slammed and they started again, except for the girl in front of me, she
remained sleeping. The others did not seem as frantic as they were when I first entered; I felt it was
their Reiki nap.
I heard these amazing stories about shelter dogs from many of my colleagues and teachers. I had
many powerful teachings while offering Reiki to wild animals, dogs, horses, and cats in a sanctuary or
home environment, but my experience with dogs in a shelter environment was limited. Reiki is very
successful with animals as they are far more sensitive than humans and are highly receptive to the
Reiki energy. Animals are like Reiki sponges, soaking up the Reiki energy as it is offered to them,
without trying to analyze it. I left feeling in total awe of what I just experienced and knew I had much to
share about Reiki with the animals and their humans.
Reiki pronounced (ray-key) comes from two Japanese words “Rei” meaning Spiritual and “Ki” meaning
energy, combined it is Universal Life Energy. Reiki was discovered in the early 1900’s by Dr. Mikao
Usui. Reiki is a holistic healing method that is gentle and non-invasive, yet powerful. It can help
balance and restore energy centers while allowing the release of pain, stress, grief, fear and other
blocks in the mental, emotional, spiritual and physical bodies. Today it is used in many hospitals,
medical programs and hospices throughout the world. Reiki can compliment western and holistic
medicines without interfering with them; however Reiki should not be used to replace veterinarian or
human medicine.

Jodie is an Animal Reiki Teacher and Practitioner. Please visit her website at www.equushearts.com or
call 541-788-1728 for information on services and classes.