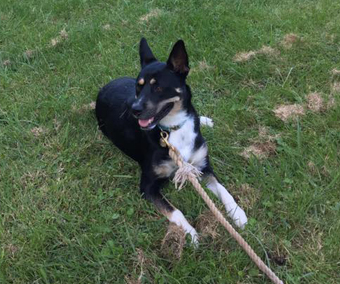 Like most rescues, Zahra’s story is not fully known. A gentle, sweet mutt with upright pointy ears and a noble square muzzle, she appears to be part Great Dane, part Australian Cattle Dog.  Zahra was adopted from a shelter in New Mexico.  Her new family, Kirby, and her partner Alex (musician and teacher) were thrilled when their application to adopt Zahra was approved. This approval came just as they were heading to South Carolina for a family vacation. The shelter was unable to hold Zahra until their return and so they packed dog food, water bowl, toys, etc. and took Zahra along to the beach.  Zahra proved to be a good traveler.  No nausea or drooling, she enjoyed riding in the car and was well-behaved on leash. So far, so good!

Once at the beach, Zahra continued to reveal more of herself. She was housebroken and sweet, immediately wanting to play with Kirby’s mother’s older hound dog and enjoying lots of cuddling. She splashed about in the waves, retrieved toys, barked joyously at sea gulls and raced the sea birds along the shoreline. Tongue hanging out and eyes bright, she would flop down on a beach towel for wet, gritty belly rubs. So far, so good!

Reality often blindsides us… Realization that Zahra suffered from separation anxiety came fast and furious when the family returned from their first vacation dinner to find that Zahra had chewed her way out of her crate and done a bit of damage to the blinds in the rental house. Okay, perhaps more than a bit… they were in tatters and the wood window molding ripped down and in splinters all over the carpet. Taking a newly rescued young dog across country and introducing her to an entire group of new people and another dog was more stressful than Zahra’s new family had anticipated. While some would have given up on Zahra, Kirby and Alex took this in stride.

Over the next two years, Zahra’s family ensured that she had professional training, and they are working towards her good canine citizenship credentials. Zahra still has anxiety attacks, but Kirby and Alex carefully introduce her to new situations and living quarters, making certain that Zahra is comfortable before ever leaving her. Zahra gets lots of exercise – long walks each day and play time at dog parks.

Zahra’s family moved to Florida a month before Hurricane Irma threatened.  Zahra had settled into their new home, and had welcomed a new puppy, Mila, an energetic eight-week old German shepherd puppy. Kirby and Alex chose to evacuate ahead of the destructive hurricane, and arrived at our little farm after more than 12 hours of driving and many rest stops for both people and dogs.

Zahra had visited us before, and our shepherd Cleo was ecstatic to see her play friend again. Much wrestling and “face fighting” and racing about the house!  After a couple of days, we thought we could leave Zahra with our dogs and have dinner out.  My mistake was in not making sure that Cleo was with Zahra. They got separated in the house and while Zahra was in the garage with our quiet and gentle hounds, Cleo had slipped back into the house and was on the other side of the door that connects the garage to the family room.  We returned to a chewed-up door frame and a distraught Zahra.

I asked Kirby if she would be okay with me offering Reiki to Zahra. Over the next few days I would sit on the floor creating space with the Hara meditation, and quietly offering Reiki. As usual, my dogs would immediately flop down close by and relax, but Zahra would pace or, if they were in the house, wander off to be with her own people.  Days passed and unable to return home due to power outages and flooding, Kirby and Alex wanted to explore and visit friends in our area. They were reluctant to leave Zahra, afraid that she might be a nuisance for us. Recently retired and with free time, I suggested that they get away from the farm and enjoy themselves.

Zahra knew when they left and she paced by the door.  We have a large elevated deck with gates, and I let Zahra out on the deck, with her friend Cleo and little sister Mila. We sat out on the deck and Zahra fretted, staring down the driveway, pacing by the door.  She was ramping up her anxiety and this felt like a perfect opportunity to practice chanting.  As soon as I began, my dogs Cleo and Kensi immediately laid down and went to sleep.  Sometimes I think I hear them saying, “there she goes again, with those strange words! We’ll just wait until she’s ready to take us out to play…”   But I think they enjoy the energy created by meditation and chanting.  Zahra continued to pace for a bit, but her breathing slowed and she began to sit down occasionally.  Not exactly relaxed, she would stare intently down the driveway, waiting for her people to return. Her puppy sister Mila was enjoying lying on the deck, eyeballing the cats who would wander by.

With all of these various personalities mixing it up, I wasn’t sure what would happen so I continued to chant, mixing in the Sei Hei Ki chant. At times, Zahra would lie down for a few seconds, still not relaxed enough to sleep, but this felt like a break through.  Sundance, an orange tabby cat, curled up on the railing and nodded off. A feeling of peace and calm overcame the deck, and even the birds seemed to take a break and it became very quiet. Calm disappeared when my niece’s car came up the drive, but there were moments when all of us, dogs, cat, birds, and human, were in a state of peace and harmony.

I continued to chant with Zahra each day, taking the opportunity to practice with her each time my niece left the house, heeding guidance from the Animal Reiki teleclass that at least four days are needed.  On the second day, she relaxed much more quickly, lying down at a bit of a distance from me.  On the third day, she lay down right next to me and actually closed her eyes.  I don’t think she slept, but she was definitely becoming more relaxed and stopped fretting much more quickly.  On the third day, I also noticed that Sundance would join in during the chanting – that was unexpected and made me laugh.  She would meow during the chanting and go quiet when I did.

On the fourth day, after my niece left the house, Zahra barely registered her departure.  She looked down the driveway once, and then curled up and went to sleep! I continued the chanting practice each day as the opportunity arose, sometimes just for a few moments, sometimes longer. Soon my guests received word that they could safely return home. To Cleo’s dismay, her friends Zahra and Mila returned to Florida.

We will never know the cause of Zahra’s separation anxiety, but it is my hope that the confidence she has gained through wonderful care and training, and the feelings of safety and serenity that Zahra felt during the Reiki chanting will return to her whenever she begins to feel anxious and alone.