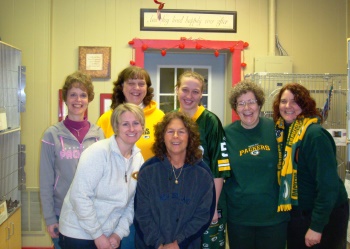 I had the privilege of teaching a Level 1 Reiki and Animal Reiki class with eight volunteers and staff at Happily Ever After Animal Sanctuary’s Green Bay Adoption Center near historic Lambeau Field, home of the Green Bay Packers. After creatively planning around the NFL playoff schedule and other sanctuary events, the final class session was held on February 5, 2011, the day before the Packers won Super Bowl XLV. Even with the excitement and anticipation of the Super Bowl the next day, we successfully completed the class and received a valuable, basic lesson from five beautiful cats.

The lesson taught by the five cats is that we want to allow each animal to choose how they wish to receive Reiki energy at that time. For a guided treatment, the cats were brought into the small room where the class met. The class sat in a circle, and we created our Reiki space to include the area inside the circle. Each cat responded to the Reiki energy differently.

Two of the cats almost immediately chose to jump up on the laps of the four people sitting on a futon couch, with one lying directly on the heart center of one of the class members offering Reiki back to her. The other three cats wandered around the room for a few minutes, with one of them eventually joining the two on the futon. Another cat continued to walk around the edge of the Reiki space, and finally lay down under the futon where we could not see him. The other one jumped up on a cat tree that was just outside the Reiki space curiously watching everyone in the circle – he was experiencing the energy, but not yet ready to fully join the circle. Each cat was accepting of the energy, but chose to receive from a different place or from a different person.

I want to thank these five cats for helping me teach my class this basic lesson in offering Reiki to animals – allow each animal to choose and each will likely choose differently.

Following are a couple of comments received from the class:

“I just really thought the way you taught the class was wonderful. You were so organized and structured, but at the same time, the class was actually relaxing to attend! I just really feel confident that I can DO this – now I just need to make more time. I have no suggestions – other than to keep doing what you’re doing.”

“I thought the class was fantastic…..You made the class fun, fast paced enough but not too fast. Loved the stories that helped me relate to what you were teaching.”