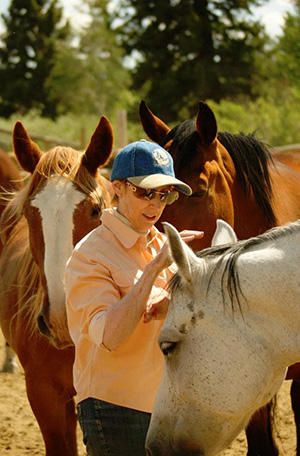 A friend of mine owns a small guest ranch here in Montana and, in the spring when their horses are brought in from winter pasture, she has asked me to help evaluate them prior to the season beginning. A couple of years ago she had a new horse that she named Butte (after her hometown here in Montana).  She asked me to work with him as he had a habit of tossing his head and not being attentive. So I undertook the task.

This was just after I had studied in Florida at CARE with Kathleen Prasad and received my teaching certificate.

I was reciting the Precepts most mornings and meditating with them.  I was coming to understand that we do not deny our feelings and “stuff” them. After all, anger and worry can be safeguards…and powerful teachers.  Rather, we are to recognize those emotions and “ lean into them” (as per Pema Chodron) with an open mind as to what we can learn and how we can mitigate the anger and worry.

I was attempting to keep those precept in mind while working with Butte. For example one of the days we were in a clinic with spectators.  He was distracted by what was going on outside of the arena.  I felt anger at him for not listening to me and responding.  I recognized the anger (Precept #1) and questioned why it arose.  I discovered that, in this situation, the anger manifested because of worry (Precept #2). I was worried that if he didn’t respond, his behavior could escalate into something out of control and I might get hurt. More important, I worried that those watching would see me as not being effective.

Notice that both of those thoughts were about me and not Butte.  One of the deep teachings of the system of Reiki is how to get out of out own way and let go of ego.  And here I was deep in the middle of it again!  I didn’t accomplish much with Butte that day but went home and meditated on what had happened.

I was humbled (Precept #3) by how easy it is to slip back into the “All about me” thinking. More important, I became grateful (Precept #4) for Butte’s teachings. This brought me to rededicate myself to my work (Precept #5) without ego. I had to be compassionate with myself for going “ off course”.

The next time I worked with Butte, I thanked him for the teaching and was compassionate (Precept #5) for the little “try” he could give me when I asked for specific movements.  It was the best ride I have had on him!