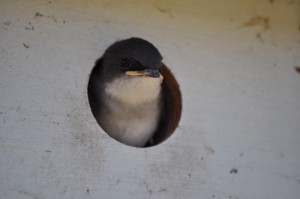 The nesting box sits in a rather unremarkable location in the backyard. I have walked past it on numerous occasions but it has always been empty. This morning as I strolled past on my way to feed the chickens, I became away of the chirping coming from inside the box. As I stopped to take a peek I could only catch a quick glimpse of mama, who ducked quickly back inside to the safe dark confines of the box. I could hear the chirping of the babies inside. It didn’t take long for papa to become aware of my presence and as I passed by again to deliver fresh water to the chicken coop nearby, I was soon being “dive bombed.” I knew immediately that papa was in protective mode and stopped only momentarily because having this bird swoop to within an inch of my face and head was a bit scary to say the least.

My delivery finished to the chicken coop, I quickly retreated to the safety of the house but realized shortly thereafter that this was a perfect opportunity to offer Reiki. I so wanted to become acquainted with mama and since I would be caring for the family chickens for another four days did not want to be “dive bombed” every time I ventured out into the back yard and wanted papa to know I meant him no harm. I watched from the kitchen window as papa dutifully brought food to mama and the babies.

A short time later, I ventured back outside and stood about five feet from the nesting box. I caught a quick glimpse of papa sitting on the roof of the house. After setting my intention and telepathically communicating with the birds that I meant them no harm and was offering Reiki to them, I began. The results were quite astonishing. Papa continued to get food for his family, but his flying patterns changed. He flew gentle circles above me and never once “dive bombed” me. Mama came to the front of the box and just looked at me. Papa arrived shortly thereafter with another mouthful of food and after giving it to the mother simply flew away as if I wasn’t there. As I continued to offer Reiki, I could see a palpable change in the demeanor of the mother bird. Instead of loudly chirping for papa to bring more food, she just seemed to wait patiently her eyes closed. Papa continued to fly overhead but never showed any aggression towards me. Soon the mother bird took on the appearance of pure Reiki bliss. Papa delivered food several times. I decided to move closer and eventually found myself within inches of the opening of the box talking softly to the mother bird and she never moved but just sat there breathing gently eyes closed for the most part accepting my offering of Reiki. It was truly a magical experience. The chirping of the babies completely stopped and all was silent.

Each day as I passed by the box to deliver food and fresh water to the chickens, I always stopped to offer my hellos to mama bird. She always stayed near the opening and never ducked back inside. In the four days that followed, I was never attacked or “dive bombed” by papa. What an honor to have these marvelous little creatures allow me into their world. I only had one additional opportunity to offer Reiki to this family and as with the first time, they all accepted my offering with pure bliss. I sensed telepathically that they were all quite grateful. To be able to bond with these wild little creatures through the magic of Reiki is such an honor and with every new interaction, I become more and more grateful for another new friend. In this case an entire family! Thank you Reiki.