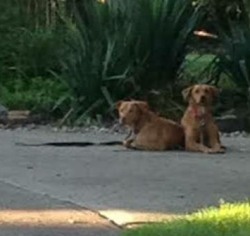 Two Chesapeake Bay Retrievers were wandering (scared and unapproachable) in my friend’s (Lynne’s) neighborhood for over ten days. She had been trying to befriend and catch them. Someone had obviously dumped them. One was dragging a leash and the other was dragging a short chain. Lynne had been leaving them food & water. They were pretty much staying in an elderly lady’s yard at the end of her dead end road and would run if you approached them.

Lynne called me Saturday, wanting to know if a stray-dog Reiki session would help catch them. I went over there Saturday evening and was sitting in the road “Being Reiki”. The one dog (later named Opal) started to act like she wanted to get closer to me. When I saw that Opal was responding to me, I also used some dog food to coax her. She didn’t get close enough that night. 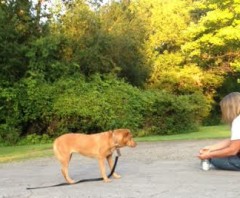 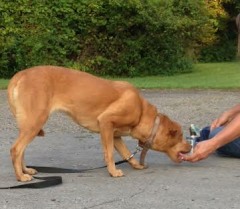 Sunday morning I went back and Opal got closer. I was finally able to grab her leash. I led her to a fenced yard next door to Lynne’s house and the other dog (Ruby) followed us. After Ruby followed Opal and I into the yard, Lynne closed the gate. Opal laid next to me and after a while, Ruby settled down and got closer. Lynne sat by me and when Ruby was finally Reiki napping, Lynne was able to grab her chain. 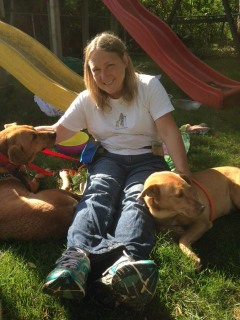 Monday morning we took the dogs to the humane society where I volunteer. They were immediately given vaccinations, bordatella nose spray, heartworm/worm meds, and given a big room to stay in. They are about three years old and most likely sisters. They are scheduled to get spayed/microchipped next week. Ruby has a mammary tumor, and that will be removed when she gets spayed & sent for a biopsy.

Both will also get heartworm tested. Once all the vet services are completed, they will be put up for adoption. Now that they’re not scared anymore, the humane society director says they will go fast. Lynne is pretty sure it was the Reiki that got Opal & Ruby finally captured. I’ll be working with them when I go there. Hopefully they’ll be adopted soon.

Quick Update on Ruby & Opal: Both are doing fine and acting like normal “pets” again. They are scheduled for spay surgery and Ruby’s tumor will be removed and sent in for a biopsy analysis. Neither of the dogs have heartworm. Yay! They should be out on the adoption floor soon!