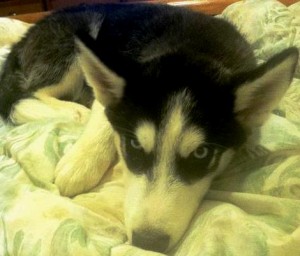 My bestie, Laurie, had posted on Facebook that her friend, Greg, had been in an accident and flipped his SUV. His Husky puppy, Argus who was with him in the vehicle, had bolted out of a broken window and ran away from the scene. Greg was taken to the hospital to make sure he was okay and had no idea where Argus had gone.

When I received Laurie’s message, I assumed she was saying the accident had just happened or at least not too long before her call. Later I found that it had been hours. Since the accident supposedly happened near an intersection behind my neighborhood, Laurie was alerting me in case I happened to run across Argus on the loose while I was out and about.  After hearing from her though, I felt compelled to go looking for Argus.  The accident occurred on a highway that is very busy and would be extremely dangerous for any animal on the loose.

As I started driving towards that intersection, I felt like I really needed to have the point of origin where the accident happened; there were so many possible places to start looking. Laurie texted me back: “fence road.” Well, I thought she was telling me the accident was near a fenced road. So I thought maybe the airport — there is a lot of fencing around there.

I told my neighbor and fellow animal lover about the situation. She also began looking and alerting others too. As we were both driving around searching, we started to think this is like looking for a needle in a haystack…lots of potential ways he could have gone…lots of wooded areas.

Although I was out there searching and desired that he be found by someone, anyone, I really had no expectations or even hope of finding him myself. I didn’t even do all the things mentally I know to do like visualizing finding Argus, surrounding him in light or anything like that, but because my life IS my Reiki practice, the “heat” was automatically on. Something I did do once I began driving around was say aloud, “Argus, where are you?” Right after I said that, I felt a sensation across my chest – like a sensation of what it would feel like to wear a harness. I do not to this day know what that meant — if anything. I told the Universe *if* I was going to be of service and find Argus, I was going to need A LOT of help because I do not have much skill at hearing and understanding intuition and the unseen helpers /guidance. My mind takes over and I usually do the exact opposite of any intuitive hits I may get, or I don’t understand the messages at all. I really thought the only way I was going to find Argus was if he just walked out in front of me. Everyone following the story hoped he would be found of course, but it seemed like a shot in the dark. I felt that way too.

I drove out to the airport area – farther and farther from the intersection behind my neighborhood. At that point I was feeling like I would need to give up and go on to a pet sit I was scheduled to do. I proceeded to drive behind the airport and circle back around to the highway. As I got back on the highway, I saw “Fence Road!”  This was nowhere near the area behind my neighborhood incidentally. I thought that would be too odd to be a coincidence and then I also saw some debris from an accident. I thought: THIS IS IT!! I found the point of origin! For some reason that seemed very important.

I got Laurie on the phone as I stopped and got out of my car. I felt the strong compulsion to yell: “Argus!!!” So I did, though I felt silly. No, nothing happened. Laurie said she felt Argus would be no where near the accident since he is a Husky and would be miles from there by then. She also felt if he was nearby he would be stuck in the woods somewhere wrapped up around a tree because he had a retractable leash on. I continued to drive around anyway. I found a dog park nearby. I stopped there twice and asked a few people about seeing Argus. I found out later that is where Greg and Argus had just come from before the accident.

I had been driving around up and down Fence Road when I saw a cemetery and thought I would drive through there before REALLY giving up. Laurie kept telling me to give up and go on pet sitting. As I was driving to the cemetery, I missed my turn and had to cross the highway to turn around and come back.  My neighbor and I both ruled out looking in the direction across the highway for some reason. Fence Road ends at the highway and across from that intersection behind some woods was a driveway that led to an office building of some sort – not a public road.  Argus would have had to survive crossing four fast moving lanes of highway traffic to get there. That seemed unlikely.

I decided I still needed to look in that area.  Well, I couldn’t believe my eyes!! There he was in the driveway as I pulled in!!! Right in front of me! It turns out the “needle” was on TOP of the haystack after all!! He was directly across from where the accident happened but could not be seen from the highway. Argus started to shy away from my calls so I knelt down and called him over.  He dropped his head, wagged his tail, and hopped in my car! I was told later that he doesn’t get in vehicles on his own. He usually has to be lifted into them. Argus must have been SO ready to go home! It was truly amazing!!! And that’s SUCH an understatement! I was SO happy and grateful not to mention completely surprised! I kept saying to the Universe: thankyouthankyouthankyouthankyou!!!

After that, it was a little anti-climatic for a bit because I could get a hold of NO ONE to tell! Argus’ people were not my personal friends, so I didn’t have a way to contact them and didn’t know exactly where they lived. As it turned out they had left the hospital at about the time I found Argus, but their cell phones were dead, and no one could reach them to tell them their boy was found and safe. They immediately went looking for Argus upon leaving the hospital. Laurie disappeared from contact for about an hour. So here I am with the prize and no one to give him to! I finally reached Laurie and ended up taking Argus to her house until his people could be reached. It seemed as though Argus knew Laurie was the catalyst to his being found. He very warmly greeted her with lots of high fives. Really – high fives! So cute!!! Argus’ people got home after giving up the search to hear Laurie’s message on their answering machine that Argus had been found and was safe at her house getting a nice Reiki treatment. Tears of joy!!!

Though it was “me” that found Argus, I totally felt like I was merely being moved into play from unseen forces. At no time did I ever feel like this was my will, actions, or choice. It was the oddest experience of my life. I wish I could convey the exact feeling more accurately… Everyone wanted to thank me over and over, but it was me that felt like *I* needed to be the one thanking the Universe or whatever / whomever for being a part in this story. And I did – and do. THANK YOU!!!

I’ve recently had to witness a slew of hard, very hard, animal tragedies. I will not share those stories here as they would be too hard to hear for any animal lover. Being an animal lover and Reiki practitioner, when thrown into these kinds of “dark” experiences, I want the suffering to immediately come to a stop. Reiki usually does such a good job of doing just that. It’s usually very obvious that Reiki provides peace, comfort, or relief of some kind, and if they are close to passing, they go more quickly. But for these animals I could see none of that with my human eyes. It’s always possible that more goes on than any of us can see, but suffering is hard to bear witness to. These experiences left me reeling and doing A LOT of soul searching and questioning because there were so many of these tragedies – one after the other.

Getting to participate in Argus’ journey helped ME in so many healing ways. It was just what I needed for my tattered and broken heart. Contrasting and comparing the two kinds of experiences (light and dark; happy and sad) shows me that really NONE of it is up to me. Honestly, I don’t know for sure what IS really up to any of us – even our own experiences. Sometimes we’re part of the story, puzzle, or experiences of others. Sometimes maybe we are just the witness – no participation or action allowed or required, not just from the animals or ourselves, but from the Universe.

Laurie also tells me that the many people that followed the story on Facebook (with their breath held) were uplifted in many different ways. Argus being found in such a seemingly miraculous way was like an elixir for their souls too. Healing took place far and wide. Many people have told me different things that they personally have gotten out of this story. Some say it’s about never giving up hope. For some it’s about asking for guidance, or it’s about listening to intuition. Others say it’s about prayers being answered and Divine intervention. It is about all of these things. True. But for me personally it was being able to experience the light and dark, the happy and sad experiences of life realizing though we have every right to be happy or sad with those experiences, we may not have as much say in the outcomes or the process as we tend to think and hope. We have to let go of our preconceived notions of what we think ought to happen, keeping always in mind that Reiki helps bring about the highest good – whatever that may be. “Letting go” being the operative phrase.

Humans always want to know the “whys” and like to feel that we have some control over our world. These experiences tell me that it’s ALL really still a big mystery. Maybe the answers are like finding a needle in a haystack, or maybe the answers are right out in the open, right on top of the haystack, like Argus was, waiting for us when we get there. “Let go,” as Kathleen Prasad says, “even if we have to do it over and over again.” Thank you, Argus, for shining the light on all of our hearts. Animals are the best healers and teachers. This I DO know for certain!