Friends of mine are licensed to raise reindeer on their farm. I was called one day regarding a baby reindeer having difficulty in breathing and not eating or drinking. On arrival at the barn I found the baby reindeer in a small pen, barely standing on skinny, wobbly legs, wheezing and shaking badly. My friend indicated that the veterinarian had seen the baby reindeer and could not come up with a diagnosis at that time. I went into the pen and offered reiki to the baby reindeer. 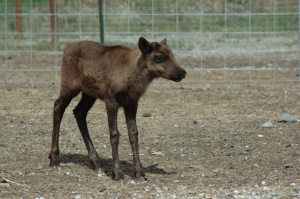