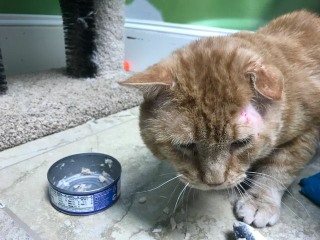 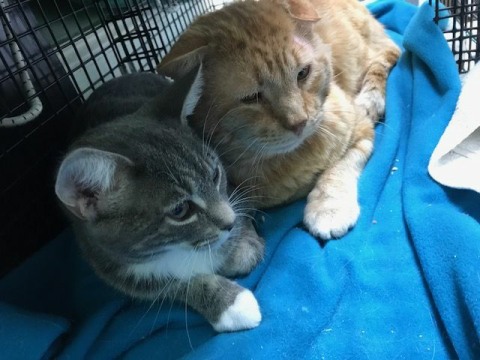 I recently worked with a shelter cat named “Bebe”. Bebe was rescued from a situation where he was living mostly outside of a basement apartment, entering through a well-window for food on occasion. It was unclear if the apartment tenant felt connected to Bebe but did seem to be feeding him. At some point the tenancy fell apart and Bebe encountered some sort of violent exchange while outside. He was chewed up and terrified when trapped and brought to our shelter.

This particular shelter is a No-kill, cat only shelter. It serves as a sort of cat hospice for elderly cats and is a place where cats are processed to barns, homes, and other situations as appropriate. I had worked with several cats that arrived untouchable and arguably unadoptable who, through Reiki and patience, began to unwind from traumas and found welcoming and sensitive humans to share their lives. With Bebe, I was not sure it was better for him to be alive and in our care. I know this is a radical statement but it speaks only of the severity of the distress this cat was experiencing and my estimation of the quality of his life. He was withdrawn in the extreme, crouched (not curled) in a corner of a crate in a room by himself where he could have wandered and explored but chose not to. He emitted something worse than a growl, a low, pitiful moan whenever I sat with him and I did for hours and hours over more than two months. My desire for release for him became seriously disruptive to my reiki offering.

While I knew, intellectually, that I could not bring my hopes for specific positive outcomes into the intentions of the reiki practice, it was easier “known” than lived. I found that I felt an increasingly desperate plea in my meditation and I could see it as not right. But, I found it hard to resist the overlay of such intentions given the profound suffering I saw. Isn’t it natural to hope for “release” from suffering? Isn’t that consistent with wanting to create space for healing? In the midst of this crisis I wrote this note to Leah.

“There is a cat, picked up wandering and wailing, badly beaten and inconsolable. This is an orange cat, a male with ears that are badly maimed and a gash on his face healing very slowly. This cat is in the worst condition I have seen in all my time in this shelter, not physically, but spiritually. For several weeks I have been sitting in his room, always at least a yard away, and meditating. I use the precepts and the Choku Rei and Sei Heki. I draw the symbols in my hand and meditate on the meanings. I chant and I use Dai Ko Myo. I focus wholly on my own peace and calmness. It is truly all I can offer this creature who emanates fear and despair. Occasionally as I draw the symbols in the air or in my hand, the cat growls, a low guttural noise that is the most agonizing I have ever heard from a cat. Nothing changes for this cat. In my three weeks now of sitting with him several times a week, I observe no change. This week I had the strong, strong sense that he wanted to leave, to die, to be freed. I wondered if I may have received the message because I created a space where it could be heard. I have not shared this with others at the shelter or in classes and am anxious to hear what you might feel in my telling this story. He is in an agony of spirit I have not sat with before. He is not going to die physically. He is lonely and unapproachable. Certainly this could change, I believe in the power of energetic healing but what is humane if he remains so disturbed? He is not hurting people and is being kept isolated from other cats. I can only continue to sit with him and focus inward but the message was clear and in its way, desperate. Hard to not want things to be better, healed, light filled for him. But, this is not about wanting….”

In response Leah (Leah DiAmbrosio, VP SARA) wrote to me: “When we are offering Reiki, it’s important to be open and remember there is no giving and receiving there is just a beautiful connection of your light to the other person’s or animal’s. If you become attached to the idea you are giving a gift with your Reiki then you are disappointed when the gift is rejected. In this beautiful space we are creating of connection, there is no giving and receiving – just oneness. When we attach ourselves to an outcome that creates a wanting and a wanting creates a need to hang onto an outcome and in that space of hanging on, nothing can move. Letting go is freedom and in that space of openness, anything can happen.”

As so happens with our Reiki teachers, human and animal, we receive what we need when we can use it. Leah’s caution to me about “wanting”, fit perfectly with my sense that my desire for Bebe was interfering with my creation of the space. After all, many of us are drawn to this work with animals by a strong and sincere ethic about animal welfare, freedom from suffering and freedom from cruelty. It is not surprising that I would get distracted by extreme suffering of Bebe’s sort.

Two weeks ago, two and a half months after I met Bebe and began regular reiki offerings, Bebe came out of his crate to eat tuna from my hand, roll on his back and present his belly in a demonstration of trust! I was shocked and moved to tears. Secretly I had given up on Bebe and become a silent advocate for his “release”! Gratefully, I do not control the energy! Bebe was healing, in his own way, in his own time. Hard to describe how dramatic this was. He didn’t inch his way over to me, he didn’t allow me closer or stop growling. There was a hard change and he simply moved from despair to hope with an invisible process. He was loving and engaged and catlike! He was no longer afflicted by fear. So very beautiful, such a teacher.

The next week Bebe “adopted” another very frightened kitten who he curled with and protected. Who he taught to eat tuna and tolerate people and the next week the two were adopted together by a person who appreciated their history and had patience for their future.

I think I am finally over the habit of limiting the power of reiki by imposing my own desires and decisions about needed outcomes! If I forget, I have Bebe’s teaching and Leah’s careful reminder to pull me back.