From my first visit to Horse Rescue Australia I really got to understand what it means to just ‘be’ Reiki rather than ‘do’ or ‘send’ Reiki, thanks to some expert guidance from my four legged teachers.

A lot of the horses at HRA have been rescued from years of abandonment, others from abusive situations, while others are young and perfectly healthy but there because of unfortunate circumstances and waiting on a new forever home.

But no matter what their reason is for being there, all the horses provide instant feedback when it comes to Reiki and each has their own way of letting me know what they want – or don’t want, as well as where, when, how and if, and for how long! With so many variables it’s been a very effective way of learning to ‘just be’ and ‘to allow’ and ‘not to expect’.

Its been several weeks since my first visit and I have come to know that each visit will be completely different from the last with no guarantee that whoever was open to receiving Reiki last week will want it this week. Except Sandy… 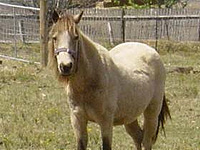 Sandy is a pretty little buckskin mare approximately 24 years old who came to Horse Rescue in 2000 when she was rescued with some of her friends from a herd of 22 ponies running wild in a 10-acre paddock. At the time Sandy had a very young foal at foot and another still suckling from her. She had probably spent her life before HRA having babies. Sandy was so scared of people HRA carers couldn’t go near her without her trembling like a mouse. She is very smart, and very good at not being caught!

Sandy is still very scared of people, so much so that her first encounter with Reiki was experienced from behind the safety of the herd while I sat on a tree stump at a respectable distance, during which time the rest of the herd relaxed and went through the usual range of peaceful activities horses go through when they’re enjoying Reiki. Every now and then I’d open my eyes and take a peek at the resting horses, a yawn here, a stretch there, the occasional position change somewhere else – and there would be Honey and Sandy; on full alert positioned safely behind the others, their necks stretched tall like a pair of giraffes and keeping a close eye on me, just waiting for me to move an eyelid, which of course would have been their cue to high tail it to the other end of the property!

But I didn’t, and they didn’t, and when the rest of the herd gently broke off and started to graze some 40 minutes later, Honey and Sandy simply moved off with the herd without the calamity I’m sure they expected.

Over the weeks I’ve been visiting the horses I‘m getting to know all their little quirks and personality traits, and how they like or don’t like to receive Reiki, how sometimes they’ll stand for 30 minutes, other times not at all, sometimes they like hands on and sometimes they prefer Reiki from a distance. But the one who has been the biggest surprise has been Sandy. Of all the horses, she will always accept some Reiki during my visits, preferring to receive her treatments from a distance when we are out in the main paddock.

There is a large flat rock under a shady gumtree, which is perfect for me to sit on while I offer Reiki so that has become my regular spot in the main paddock. Usually when I begin, the Shetlands immediately make their way over for some hands on treatments, or to rest their noses on me while I offer Reiki, sometimes they lay down close by and move off when they are done. Mostly the horses will take turns to receive the energy, some from a distance, some hands on, and other times I’ll have a flock of pigeons resting in the grass all around me, but no matter who else may or may not come for treatments, Sandy never misses. She has her favourite spot where she stands a little way off in her own space to enjoy anywhere from 30 – 60 minutes of energy at a time and when she is finished, she will give me a little look of thanks and break off to graze.

Last week I went into the main paddock and found the herd a little distance away from my rock, but before I could make my way over the Shetlands had spotted me and mobbed me for some hands on treatments, which appeared to annoy Sandy. I could tell she was really keen for some energy but the close proximity of the other horses really seemed to have her rattled that day. However, after the ponies had received their treatments and moseyed off and the others had also received varying amounts of Reiki, I caught Sandy’s attention and moved away from the herd so she could follow me if she chose. She did so I sat cross-legged in the grass about 10 feet away from her with my eyes closed, hands resting on my knees with palms upturned, and began to offer some Reiki. I knew that she really wanted to connect, and that if I gave her a chance she just might.

After several minutes I opened my eyes just a tiny bit and could see her creeping over to me as quiet as a church mouse. A few minutes later I opened my eyes again just a tiny bit and could see that she’d crept a little bit closer, her neck was stretched as far as she could possibly stretch it in my direction, and her eyes were as wide as saucers. I could see she was terrified so I closed my eyes again and just allowed the Reiki to flow. Then ever so lightly I felt her soft warm muzzle gently touch my right palm, then a few moments later the same warm sensation on my left palm as she investigated my other hand. It was an emotional moment. I remained still and allowed her to retreat at her own pace, as I knew she would. After a few moments I peeked again to see her standing several feet away, just enjoying the energy. We stayed like this for perhaps 30 minutes without the interference from the rest of the herd, and when she was finished, Sandy gave me that little look of gratitude, and moved off to graze and I left the herd in peace.