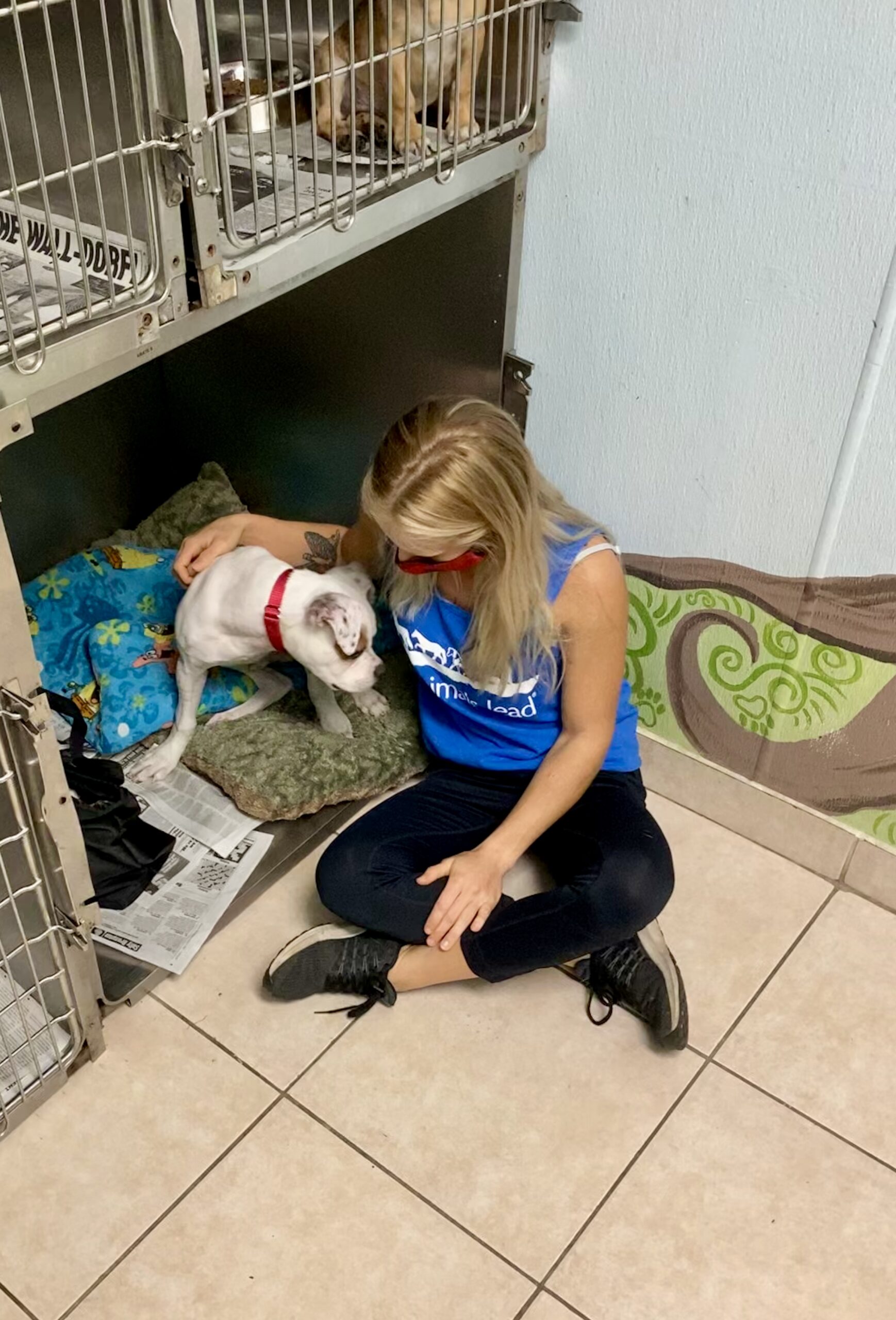 A few months ago, I felt a strong calling to begin volunteering Reiki with shelter animals. I had shared Reiki with rescued animals before but was not officially “in” with a local rescue as a regular volunteer. I wanted to put myself out there, but during these COVID times it has been challenging to meet face to face.

I heard about a local quarter auction benefiting Justin Bartlett Animal Rescue and the opportunity opened up! I attended the quarter auction as a new vendor, offering 6 Animal Reiki sessions with 100% of the proceeds donated to the rescue. Before the auction began, I introduced myself to the rescue team. The first thing said to me was “I have been looking at you all night.. I love your shirt.” (I was wearing my Let Animals Lead shirt!) I briefly explained why I was there and thanked them for the opportunity to raise money for the animals. The Reiki sessions were auctioned, with almost the entire room bidding! I’m not sure how much money was raised but I would guess about $60. The woman that won donated the sessions to the rescue, and that is how our partnership began. A few days later, I contacted the rescue’s Community Outreach and we talked about potential animals for Reiki. She mentioned a puppy that was dropped off by the owners to be euthanized because there was something “wrong” with him and asked if it would benefit him. He was blind, deaf, and epileptic. I explained that Reiki would not necessarily heal his eyesight and hearing, but I would be honored to share a peaceful, compassionate space with him. Honored to be Reiki with an animal that can only feel and smell my presence. Honored to learn from him that sight and sound are not important in a relationship. That next day, Brutus became my teacher and healer.

Brutus is a 5-month-old, blind, deaf, and epileptic puppy at Justin Bartlett Animal Rescue. When I walked into the room he was in, he was anxious and nervous. I sat next to his cage and watched him for an hour. He circled in his cage repeatedly. I did notice, though, that he would stop and stare in the direction of the doorway as people would walk by, or when the dogs outside the room would bark or go quiet. He had a strong sense of feeling other people’s movement and picked up on other animal’s when they were frightened or calm. I put my hand out to tell him I was there, but he seemed uninterested. I whispered near his ear and he seemed to lean into me as if he were listening. He began to play with me and nibble on me, playfully as a puppy would be.

The next time I visited Brutus, he circled in his cage again but began relaxing, and even laid down for a moment. I kept a few fingers through the cage, so he knew that I was there. He licked my fingers without biting. I took him for a walk and his mood brightened. He recognized the grass and trees. He seemed to notice where I was standing and followed when I moved. He became very playful and started to chase me around. On the way in, he did not want to willingly walk back inside and laid down, so I carried him in. He started circling again once back in his cage, looking out the doorway as people walked by. For another Reiki session, we went into an open exam room. I started out on the floor and let Brutus find me. He was even more playful that day, so I moved to the chair. Brutus recognized I was not on the floor, and he cried looking for me. I placed my hand out, he found where I was, and tried jumping in the chair but he seemed afraid, uncertain he would make the jump safely. I returned to sit on the floor. Brutus walked across my lap and went around me 3 times. Then he stood over my lap, sat with his body halfway on me, and relaxed. Finally, Brutus found peace. 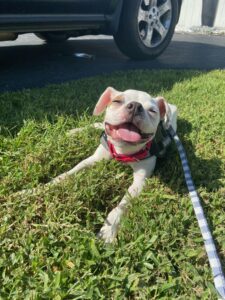 I shared Reiki with Brutus a total of 4 times, until he found a foster mom. I met the woman as she was picking him up to go home. She shared how Brutus sat on her lap and fell asleep. We planned to continue Reiki sessions distantly in the future. She sent me photos of him smiling and living life as a “normal” dog would. Unfortunately, he was returned to the rescue a week later. I continue to share Reiki with Brutus and am determined to help him find his forever home. I cherish the time I spend with Brutus and he will always have a special place in my heart. He was the one doing the healing, not me. He changed my world. He taught me to appreciate the sense of feeling and love. We built a bond without sight and hearing. We felt each other’s emotions and truly connected heart-to-heart. He trusted me to guide him, but really, he was the one guiding me. Brutus showed me how to love others from deep within and to shine our inner light to the world! I know we will always be connected by spirit, and I feel more honored than ever to keep sharing the compassion that Reiki is!