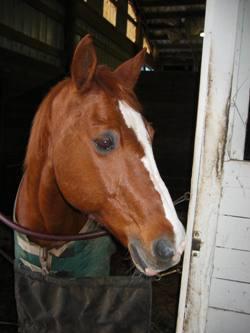 Buster is one of the many beautiful, amazing and hard working horses at Forward Stride, a center that offers therapeutic horseback riding for people with special needs. I volunteer there on Sundays doing turnout (aka: putting them out in their pastures), stall cleaning, and Reiki.

I started volunteering at Forward Stride because I didn’t really know anything about horses and wanted to learn more about them. I had offered Reiki to a few horses before coming to Forward Stride, but I really wanted the opportunity to spend more time with them to interact and connect on a deeper level.

One Sunday as I was checking the message board for any special notes about the horses, I learned that Buster was on stall rest because another horse had kicked his left, rear leg. After turnout of the other horses and a bit of stall cleaning with my awesome, volunteer buddies, we all decided I should go and offer Buster some Reiki!

I started the session standing about 5 feet in front of Buster’s stall. After about 5 minutes he pushed up against the stall ropes and was sniffing in my direction. I decided to get a little closer. I walked up to the stall and stood just outside and to the right of Buster’s head. He stood there for a few minutes and then walked in a clockwise circle in his stall. He came back and stood by me and licked my hand. Then he flipped my hand up with his nose and moved his head up and down, having me to scratch his nose and forehead. I was amazed at how he guided me to help him scratch his itch!

Buster then continued to walk in clockwise circles and stand next to me for about 5 minutes in-between each circle. After about a ½ hour of this routine he walked right up to me head on and pushed himself against my hands. One hand was on his chest and the other on his upper, front, right leg. He stood like this for about 5 minutes and then did another circle. He came back and pushed himself into my hands again and stayed for another 5 minutes. Once more he did this followed by his clockwise circle, but then he changed his routine and also did a counter clockwise circle. After that he came over and touched his nose to my hand to say thank you. Then walked to the rear of his stall and faced away from me ending the session.

I thanked Buster for being so open to connecting with me and for his guidance for the horse newbie!