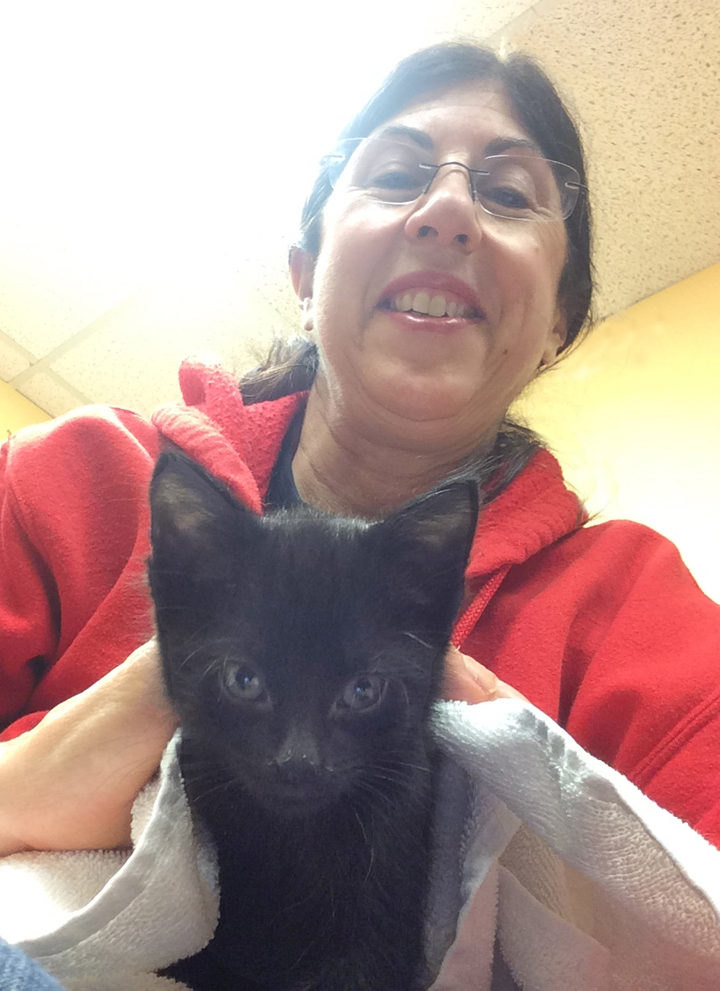 From day one, I loved the Code of Ethics. I happened to teach basic animal Reiki class, not a SARA class, and some of my students were just demanding and demanding to work with the animals. I always discussed SARA and what a light that has been for me personally, not to mention all the animals that I have worked with over the years. I would say now probably for the better part of the last 10 years, I have been volunteering on variety of different rescues.

When an early morning request arrived with an urgent plea for Reiki for a parrot, I had no idea what an amazing journey was in store for me for the next several weeks. Even though the parrot would ultimately transition, Reiki would provide peace and comfort as well as a temporary rejuvenation for him.

Sydney was a 13-year-old Quaker parrot that was quite ill. His person, Elizabeth, explained that he had pneumonia, had been having difficulty breathing in the last few days, and that his overall health had taken a downturn several months back.

He was currently being treated with antibiotics and other conventional veterinary medications at one of the local animal clinics, where the vet was somewhat experienced with avian cases. The veterinarian was not sure what had caused the pneumonia and wanted to find out. Further testing may have given more insight into this, but it was quite likely that in his present condition, Sydney would not survive. So Elizabeth hoped the Reiki would be beneficial. If there was no improvement, the vet had already discussed the option of euthanasia within the next few days.

Elizabeth asked if I would meet her at the clinic to give Sydney a Reiki session. I met her there and was appreciative that the staff was accepting of a holistic practitioner coming in to work with the parrot. In fact, they had graciously set up a small, unused exam room that we could use. The parrot was in a glass habitat that kept the temperature comfortably warm for him in order to aid his ability to breathe and hopefully recover.

I explained to Elizabeth that since energy knows no bounds, it would flow to Sydney even if I did not touch him. She was understanding of this. Elizabeth stayed with me. We each sat in a chair nearby. I spoke softly to the sweet Quaker parrot and explained that I would be offering him Reiki, which was healing energy for his Highest Good. I let him know he could take as much or as little energy as he wished.

He seemed very open and receptive to the energy, and stayed on his perch, calmly watching and soaking up the Reiki. He kept an eye on me, and relaxed into the session. He appeared to be dozing, yet still his eyes would curiously blink open to check on me. At one point, he became more alert and did a bit of grooming with his feathers, but then relaxed again. That first session was quite powerful, and I could feel he was drawing in so much energy.

There was a time toward the end of the treatment that I felt as if my heart was suddenly connected to his. Tears welled in my eyes as I felt an intense surge of emotion. It was a beautiful sensation. I thanked Sydney for allowing me to connect with him in this way, and for being a partner in the healing process.

As I stood up to leave, Elizabeth played a bit of “peekaboo” with the parrot and he happily replied, saying “peekaboo” back to her. I could see that he was a little more energetic. Later on that day, Elizabeth reported that Sydney had shown definite improvement, was playing and dancing, and had taken a very exhilarating bath.

I went back the next day, and Elizabeth stopped by to give me an update and set me up in the same room. She had to return to work so it was just Sydney and me for this session. Sydney seemed happy to see me. As soon as the energy started flowing, he became quite relaxed and receptive. He snoozed while still keeping an eye on me. I believe he almost went into a meditative state, and I could clearly feel that he was drawing in much healing energy.

Toward the end of the session, Sydney became more alert and began to eat several edamame beans that had been provided for him. Then he went back to his relaxed pose. When I stood up to leave and say good-bye, he became more awake, and I spoke to him for a few minutes. He seemed quite intent and focused, almost as if he understood my words.

Elizabeth called me the next morning, relieved that Sydney was going to be able to come home! She asked me to come to the house that same afternoon for an additional session. You can imagine my astonishment and delight to find that Sydney had a feisty, youthful female parrot partner named Coco. Coco is about three and is quite exuberantly vocal with parrot calls and communication. Elizabeth had explained that prior to my arrival, the two had just shared a warm and joyful reunion after this week apart. It was clear that they were extremely bonded, nuzzling and grooming each other, and chattering happily.

A spare bedroom had been optimally set up climate-wise at a temperature of 80 degrees with a humidifier providing moisture. There was even some soft, new age music playing! (Elizabeth is such a devoted and loving parrot parent.)

I sat on a chair near the cage, my hands palms-up in my lap. I called in the flow of Reiki energy, and then imagined myself in a sunlit jungle sitting amidst the trees with these beautiful birds perched nearby, and went into a light state of meditation. Both parrots watched me intently. Sydney was knowing and welcoming to the energy, confidently coming to the front of the cage. Coco was curious but stayed up on the perch further back. She was screeching loudly every few seconds.

At one point Elizabeth removed Coco from the cage, thinking the session would be more focused and peaceful for Sydney with Coco downstairs. But the amount of squawking that took place let us know in no uncertain terms that the Quakers wanted to be together. So Coco was returned to the cage.

Sydney relaxed into the Reiki, staying at the front of the cage. After a little bit, Coco joined him and for the last part of the session became calmer, gently nuzzling Sydney and relaxing by his side. I could feel the energy flowing particularly strongly.

Overall, I felt such a sense of peace and happiness emanating from the pair of parrots that my own spirits were uplifted and soaring on light, joyful wings!

After the session, Elizabeth helped Sydney onto my finger so I could hold him for a moment, and I was delighted with this little physical connection. She then took him and asked him to give me a kiss. As she brought him close to my face, I received the sweetest little parrot kiss and was so touched.

I heard from Elizabeth at the end of the week and she was concerned because Sydney was again having some breathing difficulties. Since it was near the weekend, she brought him into the animal hospital (her regular vet was closed) so he could receive additional oxygen and get his injections of antibiotic for the weekend.

On Sunday night, I offered Sydney a distant healing session, which I felt him strongly accepting. The next morning he was able to actually go back home with Elizabeth, and she requested that I come for a fourth in-person session. However, at this time, Elizabeth kept him in his own cage because Coco’s youthful exuberance seemed to be too much for him. So, Sydney was in his cage on top of a dresser and Coco was in her cage on the floor. Sydney was happy to see me. Though he seemed a little weak, I sensed his very strong and joyful spirit. Elizabeth had informed me that he was not eating or drinking very much, but he did eat a little bit toward the end of his session. He accepted much healing energy, remaining at the front of his cage, very calm and relaxed throughout. Afterward, Elizabeth offered him some berry juice, which he sipped quite eagerly.

The next day, Elizabeth wrote to me with some good news: Sydney was much improved and eating and drinking normally. She had taken him to the regular vet to continue with the vaccine antibiotic, and the vet was quite amazed with how energetic and talkative Sydney was, compared to the previous week. He still detected some congestion in his lungs.

Elizabeth had already been interested in learning Reiki herself, and had planned on taking my Reiki Level I class the previous Saturday. However, since Sydney had ended up on oxygen, she had postponed it. She now wished to take it as soon as possible so she could continue helping Sydney on her own. After I had shared the teachings and attuned her, we both worked with the parrots. We sat on the floor in their room and offered them healing energy.

Elizabeth continued with daily Reiki sessions and even sent me some uplifting videos she took of Sydney happily playing and building with little wooden sticks! It is remarkable the way Reiki helped Sydney rally for several weeks to have some additional quality time with Elizabeth and Coco. Though Elizabeth was secretly hoping for a miracle of complete recovery, I also know that in her heart she was preparing for however Sydney’s journey might unfold, as I think she suspected it might be his time to pass.

At one point Sydney began to be in distress again. The regular vet was not available so Sydney was sent to an avian specialist in New York City, where an X-ray revealed that he had an extremely enlarged heart, a congenital physical condition that was not curable, and minutes after the X-ray, Sydney made his transition. While there, Elizabeth made the acquaintance of a recently rescued male Quaker parrot, who had been found in very bad shape somewhere in Manhattan. He had been nursed back to health by the veterinary staff, and was now ready to be adopted. His story touched Elizabeth’s heart, and she decided that she would be his new mom, and that Coco would benefit from the companionship of another parrot to help ease her sorrow about losing Sydney. Though Elizabeth knew she would grieve for Sydney, she felt it would be a special tribute to him to give another parrot a loving home.

Elizabeth shared with me that she truly felt that having Reiki in her life at this particular point in time helped her handle this challenging end-of-life stage of Sydney’s with greater ease, understanding and peacefulness. For me, this entire odyssey of offering healing energy to a sweet winged creature showed me once again that Reiki works in such remarkable, mysterious and heartwarming ways.