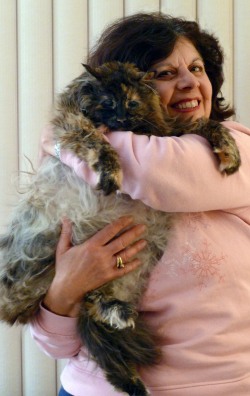 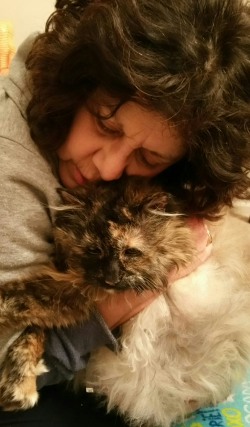 I have been a volunteer at The Buddy Foundation in Arlington Heights, IL since April 24, 2016.  By this time, I completed 3 levels of human Reiki classes from January to March 2016.  I had not yet taken the Level IV human Reiki class, Kathleen Prasad’s Animal Reiki Workshop Core Curriculum Correspondence class, or the three levels of Kathleen Prasad’s Animal Reiki classes (I – Shoden, II – Okuden, and III – Shinpiden).  In other words, I was a fairly new Reiki practitioner but I felt a special affinity toward animals.

I am the first Reiki practitioner at The Buddy Foundation.  With my volunteer experience and continued training in animal Reiki classes, I feel a strong connection with Kathleen’s traditional Japanese Reiki meditation techniques, including chanting.  Not only does chanting help me become and remain centered, calm and focused, but the animals seem to really respond to the vibrations of the tones. Here are some stories related to my chanting with the cats and dogs at The Buddy Foundation: 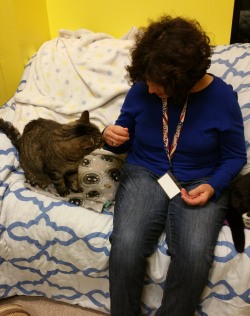 I began my meditation with Gassho to center my mind and set my intention to offer Reiki to Ranger, a young dog at The Buddy Foundation who had surgery on his left front and right rear legs.  At the time of this story, his front leg was still bandaged; he wore a collar around his neck; and still goes to follow-up doctor and physical therapy sessions a few times a week.  Ranger was on his pillow and I sat a few feet away from him on his blanket.  After Gassho, I practiced Joshin Kokyu Ho (Hara Breathing).  However, I chanted on the outbreaths.  Ranger was in his own room but it was next to the dog run, where the dogs’ barking was very loud.  Initially, Ranger reacted when the dogs barked.  He seemed to respond to the chanting and appeared more relaxed on his pillow.  Besides being soothing, I think the chanting may have also served as a point to focus on (focal point) to help block out the barking dogs.  After practicing Joshin Kokyu Ho until I felt grounded, focused and connected, then breathed normally for a short time, I sat in the energetic space for a while.  I then set my intention to facilitate whatever healing Ranger was open to receiving and invited him into the ‘Reiki space’ I had created and remained on the blanket (later moving near him on his pillow) while I continued chanting softly.  Afterwards, I went into Gassho and thanked Ranger for his participation and openness to healing, then set my intention to finish. 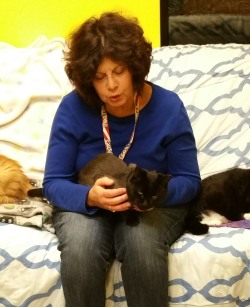 The above paragraph described the logistics of my meditation, and now I want to focus more on Ranger’s behavior during the session.  When I invited him to share the Reiki space with me, I had the feeling that if he were a cat, he would have purred.  After a few minutes into the session, Ranger sighed very deeply.  He sighed about 2-3 more times during the session.  The dog run is right outside of his room.  A couple of times he reacted to the dogs barking in the run by sitting up on his pillow and barking at the door to his room.  Once he stood up on both of his hind legs and barked, and once he drank water from his bowl.  For the majority of the time, he rested on his pillow, even though the other dogs continued to bark, while I continued to chant.  A couple of times he paced around the room, then came right over to me on the blanket – one time sitting right next to me while I petted him, and another time standing next to me but pushing his body right up against mine, while I petted him – softly speaking to him but still holding the Reiki space.  At one point he lay on his pillow but turned to face me, indicating that he wanted me to pet him.  I went to his pillow and petted his head and body.  He then lied down and stretched out on his pillow while I petted him.  While I petted his body and laid my hands on his back and sides, his legs jerked intermittently for a few minutes – especially his left front leg that was bandaged.  It was as if blocked energy was being released and working itself out of his body.  After about 30-40 minutes, Ranger needed to be walked and I ended the session, thanking Ranger for his participation and openness to healing.

The second time I worked with Ranger in his room, he was still set off whenever the dogs barked in the run, so I chanted more loudly.  This caused him to focus on my chanting rather than on the dogs’ barking.  He was very wild that night. He ripped apart a blanket that a volunteer brought in the room for me to sit on, and when the dogs first started barking he tried to nip at me (he is still wearing a cone on his head to prevent him from biting his surgery wounds).  I just told him “No” a couple of times and he stopped trying to nip me.  Anyway, I lowered my voice with the chants when the dogs in the run settled down, and chanted louder when they started barking.  Toward the end, I placed my hands on my hara (don’t know why I hadn’t thought of that earlier in the session) and chanted for a while, and then I opened my arms out.  About 30 seconds after I did that, the dog run went completely silent.  By the end of the session, Ranger had totally settled down and was napping on his pillow.

Another more significant story involves a cat named Dancer who is in a cage.  He’s a gorgeous gray and white cat.  He’s still feral and has hurt a number of volunteers.  He loves to play so I usually play with him with a toy on a string.  Whenever anyone opens his cage, he dashes through an opening to his other cage.  When I play with the toy, I’m at one cage with the door open and I throw the toy through the opening so he can play with the toy from his other cage. One Thursday I opened the cage and, as usual, he dashed to the other cage.  Then I started chanting, and he came to the cage that I was standing in front of, but the door was closed.  I kept chanting and opened the door a crack.  He remained on his cat tracker toy where I was, even with the door cracked open.  I kept chanting and very slowly opened the door wider and wider, and he remained on his cat tracker.  At one point, he looked alert when the door was open and I thought he might have tried to go out of his cage, but I closed it a bit (unfortunately, they don’t let him out as he would attack the volunteers if they tried to get him back into his cage).  Anyway, I kept chanting and opening the door slowly until it was fully open, and he remained on his cat tracker with his eyes closed.  At the very end, he walked slowly into the other cage and crawled into his bed, where he took a ‘Reiki nap.’

I thank Ranger, Dancer, and all the animals at The Buddy Foundation who let down their guard and open themselves up to Reiki, which facilitates their own healing process.  I’m blessed to be part of this process.