Recently one of our SARA members, Gay Fowler, was the subject of an article by Jackie Eichelberger, a local columnist who lives close to Gay in Texas. Jackie had visited Gay’s ranch and found the harmony between the domestic and wild animals was so unique it was worth sharing with her readers.  Although the article below does not mention Reiki, when we spoke to Gail she said she uses the Hatsurei Ho meditation every morning to create the Reiki space.  The story below is a beautiful testament to the power of her personal practice. 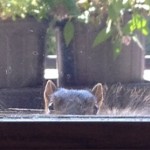 I spent the weekend down in the country at a friend’s ranch recently. My friend is one of those people that animals are drawn to. Besides having dozens of donkeys, scores of goats, fifteen horses, two dogs and one cat, there’s a mother raccoon with four babies and four possums that visit her twice a day on her upstairs balcony. Add to that the scores of hummingbirds who visit her feeders and local birds who assemble on her balcony rail for snacks during the day. She says she feels as if she’s running a restaurant whose menu consists of hay, alfalfa, cat food, dog food, sugar water and birdseed.

I was fascinated by the gentleness of this assorted menagerie. All of the donkeys, goats and horses wander up to you for a pat on the head or a scratch on the snout. I like the donkeys best because of their soulful eyes and gentle insistence on being as close to you as possible for an ear rub or a hug.

Goats, as my friend says, are Nature’s party animals. The young ones love climbing onto anything with a relatively flat surface no matter how precarious it may be. They bounce around stiff legged with playful abandon or jump from a perch with a fancy body twist in mid air…such fun to watch. They love to climb into wheelbarrows or empty feed pans for a quick nap. (Here is a cute video of the goats and donkey IMG_1371.)

The possums and raccoons come for a meal twice a day and have a dining order. Mom raccoon, Rosalita, comes first and daintily dips each morsel of cat food into the 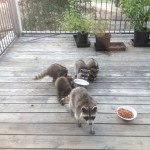 water dish as she eats. Cat food is her preferred dish. When she’s full, she rests in the corner while all four babes known as “the Rowdies” dig in with gusto, cat food pellets flying everywhere. Do you know why raccoons “wash” their food by dipping it in water? It’s because they have no salivary glands. Moisture aids their ability to eat and digest food.

If my friend is late in putting out the morning meal, Rosalita is often seen standing on two feet against the sliding glass door peering in searching for my friend as if to say“where’s our breakfast…you’re late.” When all her family is fed, Rosalita sometimes puts a paw against the glass door where my friend’s hand rests on the other side. That’s raccoon for “thank you” I think. 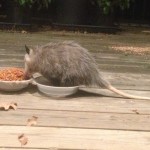 Next in the food line come the four possums…Baldy, Not-Baldy, Patches and Crash. They come one at a time and finish off the cat food in no time at all. My friend thinks that the critters are spreading the word to their friends and she will soon be overrun.

Her hummingbird feeders have turned into a regular rest haven for hummers as they make their journey from their winter grounds in Mexico and on their return trip in the fall. As many as twenty or more can be counted flying in and around the feeders several times a day jockeying for their turn to take a drink. A lot of territorial posturing goes on and skirmishes often break out among the swirling crowd of birds.

An incredible connection between the human species and the animal world goes on daily at this ranch and it’s a rare experience to be a part of it. My friend has favorites among the hoofed residents and has names for all the horses, a large number of the donkeys and many, many goats. It’s so relaxing to sit and watch all these critters going about doing the things critters do. It’s a lesson on how to coexist with Nature’s fauna and be rewarded with their gentle, trusting company.