It seems that Animals in Distress has a never-ending supply of teachers to show up and give me my lessons. Every animal I work with has something to teach me. Sometimes it takes me a while to get the idea, but that’s never the fault of the teacher. It just means I wasn’t paying attention! 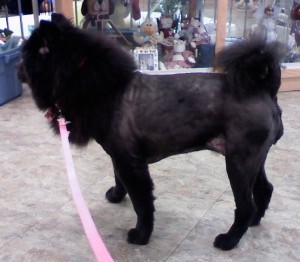 My latest “mentor” is a senior black Chow dog named Tulip. She arrived at AID a few weeks ago badly matted with some physical injuries that needed tending to. She is now sporting a lion cut, but her coat is growing out and will soon be back to its full glory.

Tulip is very shy around people she doesn’t know. That would be me. When I first met her, we decided I would take her for a walk. Tulip went outside with me, but made it clear she was not going for a walk with just anybody! She did her best to get around behind me and stay there while eyeing me suspiciously. 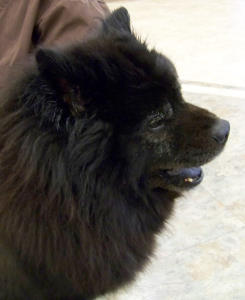 We went back inside and she reluctantly stayed with me as far away as the leash would allow her. I knew she would not like being closed in the introduction room with me, so we stayed in the hospitality area near the front desk. She was quite happy to see Lori and other kennel staff as they came by, but kept her distance from me. After a short while, I turned her back over to Lori.

I know not to take it personally when an animal reacts this way at first. They are not sure what I’m all about and given the history some of them have, it’s not surprising that they’d be leery of anyone new. Typically, it takes a few sessions in cases like this for the animal to decide I’m harmless and possibly even beneficial!

We had a couple sessions that went pretty much the same way until last week. I realized that I was trying to get Tulip to accept Reiki, which is exactly the opposite of what I should be doing. It’s all about creating a healing space and inviting the animal in, as opposed to continually offering Reiki like a treat they don’t want to accept.

Last week I sat in the hospitality area with Tulip and simply focused on creating a healing space, a Reiki bubble, if you will. My attention was on Reiki flowing into the bubble instead of on Tulip and what she was or was not doing.

Tulip stopped trying to be elsewhere and sat down at the end of the leash. Over the next 15 minutes or so I got a half dozen hearty yawns out of her, which was a clear indication that she was relaxing and accepting Reiki. She even lay down once or twice for a minute or two.

Lesson learned! Going forward, I will create the space and let Tulip decide what she wants to do with it.