I came to know Faith, a mammoth donkey, in the fall of 2007. Crystal Montgomery, the owner of Storybook Farm Equine Rescue (www.Storybook-farm.com,) called me one evening to ask if I could do Reiki with Faith. Crystal was desperate to find something that could give Faith relief from pain and symptoms…and maybe more! 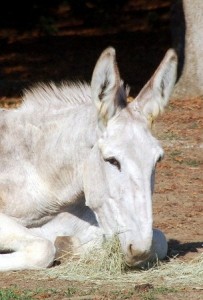 Crystal had rescued Faith the prior year in the spring of 2006. She came from a local sale barn where she was about to be put down. She was lying in a pen, not willing to stand up. She was delivered to Storybook Farm where treatment began immediately. They started trimming her feet properly which were long and contracted from a lifetime of neglect. They resembled soup cans. Her hoof x-rays showed severe chronic founder. Her coffin bone, the bone inside the hoof, was badly rotated. Faith responded very well to frequent trims, taking a small amount off each time. Her x-rays 6 months later showed huge improvements; she was walking much better and more freely.

A year or so later Faith was having a period where she wasn’t responding to any therapies or treatments. She wasn’t getting up or eating very well. Bedsores were becoming a problem. That is when Crystal first contacted me. I was not close enough that I could come out in person right away, so we set up a series of remote Reiki sessions, which Crystal was amazingly open to trying. After the first treatment began, Faith immediately got up, sneezed a couple of times, and began eating! She was on the mend and continued to do well for some time.

She would have setbacks over the years as her hoof angles changed and her legs had to adjust. Her body was used to standing on feet that were growing at bad angles, and it had to re-adjust as they were corrected. Massage therapy, chiropractic adjustments, and of course Reiki helped with this. There were times where it seemed Faith’s life on earth was coming to an end; then she would get Reiki treatments and all would be well again. We were always so amazed and delighted that she did so much with her treatments. 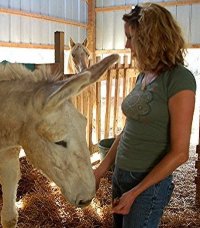 I came out to Storybook Farm periodically to offer Reiki treatments to Faith and other donkeys and horses over the next several years. I also have gotten the opportunity to teach Reiki classes at the farm. I have always loved horses and donkeys but never really had much exposure to them prior to my work at Storybook Farm. This was a dream come true for me! Working with Faith gave me confidence in myself as a fledgling Reiki practitioner – teacher. She was so open and responsive to her treatments that Faith was teaching me how to be a better more confident animal Reiki practitioner. I understood early on that Faith was giving me “faith” in myself.

This past spring, for whatever reason, Faith just stopped improving or rebounding from any of her setbacks. It was her time to go even though she was only 8 or 9 years old. As Faith crossed the Rainbow Bridge, she had a grasshopper on her legs and we thought how appropriate and fitting that was since she had so many issues with her own legs.

I often think that Faith was put on this earth just to teach me about Reiki. I am honored beyond words that I was a small part of her journey. She touched and changed my life forever. I am forever grateful. Thank you Faith. Thank you Crystal.