For several days Cinnamon, a semi-feral cat, had a high-shrieking hacking cough like he had a stubborn hairball wanting to come out; yet at the same time he was rapidly losing weight, becoming lethargic, and drinking lots of water. After several days, I finally asked his persons if I may offer Animal Reiki to him. They replied, “Please do!” 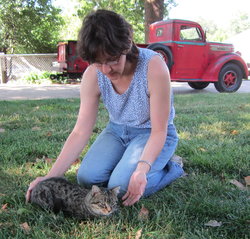 With Cinnamon’s permission, I offered him Reiki from a short distance while he lay on the grass. He continued to cough throughout the entire fifteen minute session. The following day his person commented that he seemed to be doing better. Cinnamon asked for hands-on Reiki this time. His coughing was only intermittent throughout the fifteen minute session. He shared with me that his stomach was feeling poisoned as well as he was being poisoned. I silently acknowledged his statement. While offering Reiki for him, I noticed a strong pull of energy from my back to the Diamond T truck behind me.

When Cinnamon was finished, I went to investigate to see why. Cinnamon’s feral sister, Sassy, was sitting upright behind the front left tire with a stream of fresh blood coming out of her left nostril. YIKES! She shared that she was being poisoned too!
It was also apparent that she had lost her unborn kittens. I thanked her and ran inside to Google my findings: cats and bloody nose and poison. Every link came up with “rat poison” and “take to a vet immediately” as well as a listing all of the symptoms that I have observed from the two. With this information, I told the persons that it is highly recommended to take them to the vet right away. 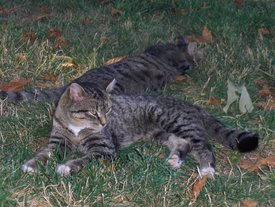 As I was speaking, I noticed that both cats were lying together in the grass. I sat down a few feet from them to offer Reiki again. I could get a sense that their bodies were literally merging with Mother Earth’s energy to become one. I also felt a tremendous sense of grounding energy for myself as I sat in the Reiki space with them. It was a very humbling and powerful sensation.

The following day, Sassy was walking around, clearly feeling better. Her eyes were bright as well as her walking gait was stronger. What was even more amazing, she wanted me to sit less than a foot away to offer more Reiki while she merged with Mother Earth’s energy within minutes of us starting. Cinnamon came over with his eyes shining and head held up high and sat down to join us. He only coughed twice during this fifteen minute session.

A couple days later, Cinnamon wanted to sit on my lap for direct hands-on Reiki around his throat. Again, the session only lasted fifteen minutes. Each time I offered them Reiki, I let them lead in how long they want the session.

I’m happy to report that both cats are doing well. They have gained their weight back and Cinnamon’s cough has completely disappeared. Sassy has returned to her happy feral self. No one can get nearer than two feet from her. Cinnamon can be picked up and be held for a few minutes; yet his new favorite thing is to lay by your feet. They continue to pass time lying on the grass together which brings a smile to me knowing how close to death they were; yet here they are…loving their time together.