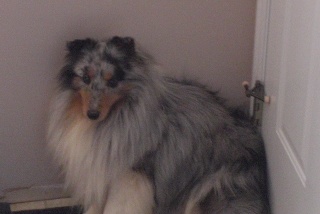 In January of 2013 my two sons and I adopted a beautiful little Blue Merle Sheltie named Gerry.  The day we picked him up from the shelter he was so timid that he ran and hid under the desk when he saw us.  It took a while, but finally we managed to coax him into the kennel with some treats.  My oldest son took him to the car and he headed home with us, his new forever family.

The first night at our house was stressful for all of us.  He seemed calm and relaxed in the car ride home so when we got him to the room where he would be sleeping, we opened the kennel door.  Unfortunately Gerry was so terrified and stressed that he ran out and messed all over the carpet. We managed to coax him back into the kennel and gave him an hour or so of quiet time before taking him for his first walk.  Gerry was so frightened that when he got out on the front step he bolted and slipped his collar.  Fortunately he turned to the right when he got to the end of the driveway and thankfully ended up in our neighbor’s backyard.  It took a while but we eventually managed to catch him.  By the time we put him to bed that night we were wondering if we had made the right decision adopting a timid dog like Gerry, especially when we had never owned a dog in the city and we were quite inexperienced.

5 weeks went by and Gerry was slowly coming around, he knew the morning routine and would actually venture up the stairs on his own to await his walk.  He had improved to the point that I felt it was time to switch from a harness to a collar so that I could teach him how to walk beside me versus walking in front or behind me.  The night I purchased the collar I took Gerry for a walk and I was so proud of the way he minded with the new collar, he seemed proud of himself as well.  It was the perfect end to a perfect day, it felt like things were finally turning around.

The next morning he came up and waited in the porch for me to get ready.  I checked his new collar and noticed that it was extremely tight so I decided to loosen it a notch.  When we got out on the front step something startled him and he slipped the collar, I watched him run down the street as fast as his little legs could carry him and by the time I got to the end of the block he was already halfway up the next one.  I was mad at myself for switching to a collar, how could I have made the same mistake twice?  I was also terrified that we may never see him again.

Gerry was spotted numerous times in the first week, both in our subdivision as well as in acreages 2 miles south of us, then suddenly he disappeared for a week.  I was worried sick about him being out there all alone and I felt responsible.  The 2nd week he was missing my Reiki teacher and practitioner Hazel Butterworth sent Gerry’s picture to Kristy Mcgale who specializes in Animal Reiki.  Kristy connected with Gerry, she said she saw train tracks and popcorn. Asked him if he was okay. Got a yes and no answer, she said he seemed to be missing his foster family.  She also sent him Reiki.  Hazel suggested that I too send Gerry distance Reiki.  I had taken my level 1 & 2 in the fall of 2011 and for some reason had stopped practicing daily.  I decided it was time to get back to it.  I had a stuffed dog that has a mane similar to Gerry so I decided to use this dog whenever I connected with Gerry and sent him distance Reiki.  Hazel suggested that while he was away I should contemplate what I was learning from this experience.

I had been seriously contemplating the lessons I was learning and the one that stood out the most was “acceptance”, we were so hung up on his Gerry’s timid nature and wishing he was more friendly and cuddly.  But the day he left I could feel the absence of his loving and peaceful energy and I realized in that moment just how much he brought to our household just with his presence.  It seemed Gerry had an impact on everyone who met him.  He had the most beautiful mane and it is shaped like a heart.  He really is a miraculous, magical dog.

Hazel suggested that I surrender the outcome, he knows you are there and he is wanting to return on his terms.  Letting go and surrendering the outcome was proving to be difficult indeed, especially since Gerry had been missing for almost a week, but the Reiki helped lift me up and renewed my faith.  Each morning and night I would connect and send Reiki to Gerry, and during these times I could feel the energy exploding through my heart, there was definitely a connection between us.

A few days later Gerry appeared one morning sunning himself under a tree in the park just beyond our back fence.  He had eaten the food we continued to leave out for him on the front porch.  As soon as I went out to the backyard with his kennel he ran away to the woods behind our house.  I left the kennel in the backyard with food thinking he may come back, but he didn’t return that night.

The next night he appeared in the backyard looking for food.  I snuck out quietly and closed the gate, as soon as he heard me he started to pace back and forth along the fence line.  I decided I would let him settle for a few minutes before I went out to catch him, but by the time I got outside he must have figured out how to jump the fence and was long gone.  I started to receive messages that Gerry was not coming home until I surrendered.  We tried 2 more times that week to trap him in the backyard but each time he jumped the fence.  On the third night he waited until we were in bed to return and eat the food we left for him, then he vanished.

The days passed and no sign of Gerry and no calls either.  It suddenly became apparent to me that we were not “getting” the lesson that Gerry was here to teach.  A week after he vanished Kristy McGale stopped by with her dog Logan.  She wanted to take a walk around the area where he had last been spotted to see if she could connect to Gerry.  She also visited with my son Cody and I and offered some suggestions on how we could connect with Gerry.  She suggested visualizing a  bridge, one on which he could meet us half way.  I am so grateful to her for sharing this information as I found it enabled me to connect with Gerry in a different way.  My focus now became acceptance of who he is (timid or not) and suggesting that we both release our fears about this situation and meet in the middle.

Hazel and Kristy’s recommendations enabled me to surrender the fear of him never coming back and to instead focus on love and acceptance.  On March 24th over a month after Gerry had run away I connected with Gerry at bedtime.  I asked him if he wanted to come home and he said YES.  I asked him if I had his permission to trap him, if that’s what it would take to bring him home, he said YES.  I then let him know that in order for him to be found he would have to let someone see him so that they could contact us.    This session moved me deeply and gave me a sense of peace that I had not felt in a very long time.

The evening of March 27th a gentleman named Ben called to say that he thinks he has our dog.  He works at a Landscaping company about 28 km southwest of us.  He said that this little dog started appearing about 3 days ago.  The reason he had not called right away is because it took him a couple of days to find my lost dog ad on Kijiji. He said Gerry was staying in one of their storage sheds so they started to feed him.  They had attempted to get near him but he would run up into the back of the property and stay there until they went home at night.  They started to close all doors to the shed except one and hoped that the following morning when they came in they would manage to trap him in the shed.

I connected with Gerry that night and let him know that these people wanted to help him come home and that it was okay to trust them.  The next morning Ben called to say that he was not in the shed but when they went looking around the property they found him caught in the fence.  They brought him into Ben’s office and made him a comfortable little spot where he felt safe and secure.  It’s hard to explain the happiness I felt inside when I saw our Gerry lying there on the floor in Ben’s office.  He looked smaller than I remembered…  I sat with him for a bit then put his harness and leash on and coaxed him into his kennel.   I thanked them with all my heart for reuniting us with Gerry.

I must make mention that railroad tracks run very near the place where Gerry was found and the movie theaters (popcorn) are also nearby. Thanks Kristy!

It’s impossible to express in words how grateful I am to all who assisted us in bringing Gerry home.  I also feel such gratitude for this little dog Gerry who sacrificed himself so that we may learn the importance of letting go of judgement and surrendering the outcome of our lives to God and the Universe.  Gerry truly is a Magic Dog and we are extremely blessed that he chose us to be his forever family.

NOTE FROM SARA: Brenda Tompkins is not a SARA member but her story came to us from SARA Teacher Kristy McGale who thought our members might find it interesting.  If you know of a story that would fit our blog, please feel free to submit it to support@shelteranimalreikiassociation.org.