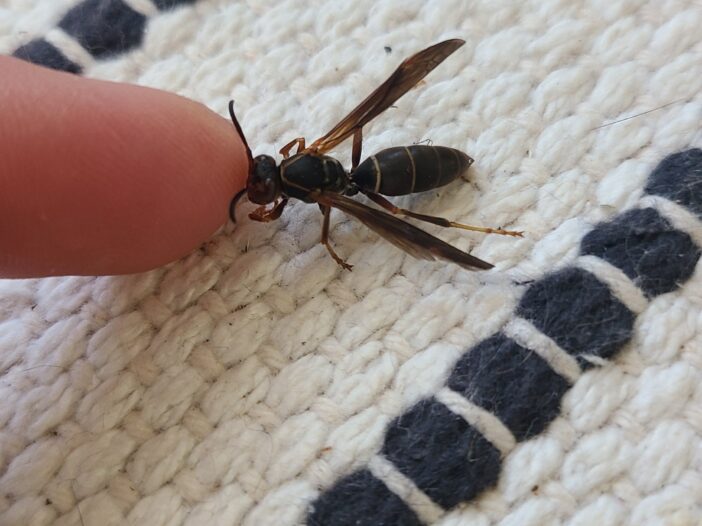 “I offered Reiki to an injured black Wasp…”

He was here in the auto shop, in the cold and I brought him back to my place. We worked together for a few days and it seemed he was getting his strength back. His wings started working again….. but then he was just too weak from being in the shop in the cold from the weekend before.

Once I had him in my warm house, he perked back up and his wings started to flutter. He was crawling around on me and he would come to me when he saw me, exploring the kitchen and plants. My cats were so gentle with him and just sat with him, didn’t touch him.

He drank water, ate some honey. I made a video – it was just amazing to connect with him like that. He would communicate with me through visuals; I would see him when I closed my eyes.

I kept telling him how proud I am of him and I said, let me see your wings and he would flutter them. I said, yes we’re going to get this! I encouraged him and it was great. I could see and feel his enthusiasm.

But unfortunately, although the Reiki really helped him (he sat on the top of my hand with his wings folded, just relaxing) and he became a little stronger, he struggled and it just wasn’t enough.

Sunday afternoon, I sat next to him with my hand on the floor. He slowly walked over to my hand. I told him that we really worked together and it was such an honor to be able to do that with him, and that I’m sorry that we could not get him back to be able to fly. They depend on their wings SO much to survive.

Then he rested one little antenna on my finger, saying it’s alright.

I didn’t want to see him suffer, so I asked for his permission to help him end his physical life – so he would not be in pain and be free to fly again with new wings. He rested his whole head against my finger. I took that as a yes. (See photo.)

I cried so much. He had become a little companion. He slept in the same spot every night and greeted me when he first saw me in the morning. Again, so amazing to be able to connect like that.

I buried his little body in the soil of one of my favorite plants and wished him a good journey. And before I went to bed I got one more visual of his body glowing and him soaring around, flying free. He got his wings back.