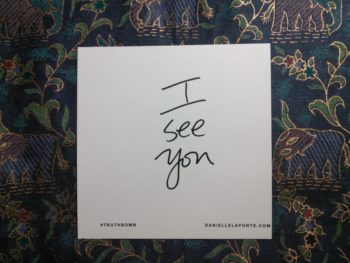 Sometimes the universe surprises. Out of the blue. No warning.

I was attending a yoga class the night before Thanksgiving when my teacher offered a deck of cards to me and told me to “pick one.” The card I chose evoked a little gasp of surprise.

I was immediately transported back to the puppy house at Tree of Life for Animals (TOLFA) in India.

My first few days in India were spent at TOLFA with my colleague, Alison McKinnon. We were offering Reiki to the animals there. The animals are in various states of wellness, with the puppy house being the place where many animals were quite ill. Several were actively dying. So many, in fact, that I started referring to myself as a death doula.

Watching the obvious decline of some of the animals was daunting, and I began to wonder how much my presence there was really helping. How many times could I sit with a dying animal before I reached the point of no return?

This was the challenge, I knew–to hold the space with love and compassion, without judgment or expectation, and to remain grounded so as not to lose myself in my emotions. Releasing any hope for a specific outcome was critical. I confess, I didn’t get there on the first try.

I have been working with animals in shelters in the U.S. for many years. I was not inexperienced. I had also had several animal clients who were preparing to pass, as well as my own kitty companions. And I’m a hospice volunteer! So, sitting with a being who is transitioning is not a new experience for me. What was new was the manner in which I was witnessing these passings. These were not the rather quick and peaceful transitions of euthanasia. Euthanasia cannot be done at TOLFA. These animals might hold on for several days taking limited sustenance and being kept as comfortable as possible. Therefore, there was more time to connect with these beautiful souls on a deeper level. To see them as glowing light beings. To see them as whole and to bear witness to their last days on the earthly plane. To connect completely through the heart. 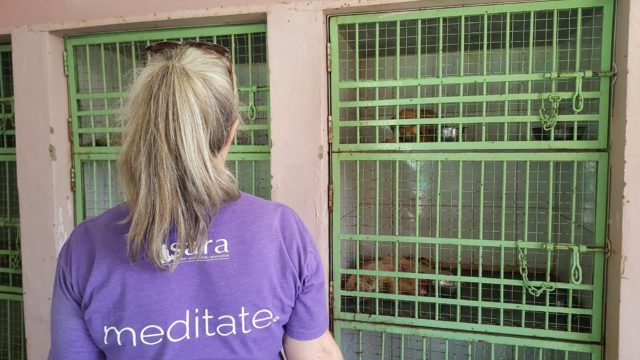 This came to my mind as I worked with one of the sickest little pups. This sweetie would make little yipping sounds when we were near in order to get attention. I would open the door of his kennel and gently pet him as he lay there. “I see you,” I would tell him. “I see you.”

Isn’t this what we all want really–a chance to be seen on the deepest level–connected heart to heart? To be present on this level is so incredibly beautiful, so healing.

When I returned from India, I resumed my visits to Rutland County Humane Society. Shortly thereafter, I was asked by staff to offer Reiki to a cat who was brought in and was actively dying.

My puppy friends had prepared me for this moment. I stood by her kennel offering Reiki as she moved through the business of dying. Tears in my eyes, I felt our connection on a soul level. “I see you,” I whispered.

Make no mistake, my heart broke a little more every time I witnessed the death of a shelter animal. It gave me some comfort knowing they passed in the loving and compassionate embrace of Reiki. These words from the book “Animal Wisdom” by Linda Bender, DVM, also give me peace:

“What I saw, reflected back to me in the eyes of the dying squirrel was the power of my own presence in that moment. It was immensely more powerful than I had ever imagined. The reason for my presence was simply that–to be there at the moment of another’s death, to witness it and to care.”