Harley, BrightHaven’s beautiful 800-lb. black and white pig, passed away on July 11, 2012. He will be so missed by everyone at BrightHaven, by me, and also by so many of my students. My sincere sympathy and love to Gail, Richard, Fray and all the BrightHaven family. He was such an amazing soul; I wanted to write a little about him for those of you who didn’t get the opportunity to meet him in person. 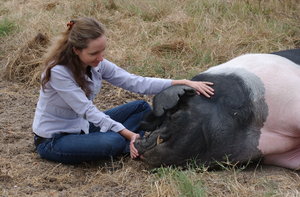 You may remember Harley from his appearance in my first book Animal Reiki. When I first met Harley, in 2005, he was still up and walking around, but a bit unstable on his feet. For the last few years he has been a paraplegic. So many students would come to work with him and think, “Oh that poor pig can’t walk.” But over and over again after sitting with him for a Reiki treatment they would come back and say, “Oh this may sound a bit strange but I feel so happy after sitting with that pig. Something about him, he is just so joyful.” Yes so many people felt so happy after being with Harley. This was one of his biggest gifts to this world, I think. 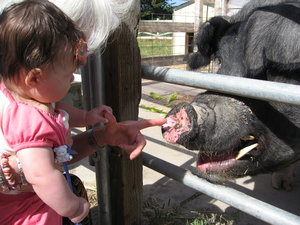 I’ll never forget the day when I brought my daughter Indigo to visit Harley (she was then about 2 and ½).  We went out into his pasture, and of course when he saw us he began his series of welcoming oinks and snorts. He was always so social and happy to have visitors! Indigo was just enthralled! She immediately sat down a few feet away from him and began singing. I had never heard her do this before—she just made up a long song with lovely lyrics such as, “I love you Harley,” “You are such a nice pig,” “It’s fun to sit here with you Harley.” She would sing her lyrics and then take a break—and Harley would oink back to her appreciatively, as if he too were singing to her some special pig lyrics. We sat there for over an hour together with him that day; it is such a beautiful memory, I will never forget it. To see his beautiful heart touch a child so much; what an amazing pig!

I have been offering Harley Reiki treatments since we met (oh he just LOVED Reiki treatments!), and I have to say that each time I came away wondering who offered whom the healing??!! Sitting with Harley was like sitting in a joyful space with a good friend who showers you with gratitude, who laughs at all your jokes, who listens to all your concerns and who is never in a hurry.

Another fond memory I have is of watching BrightHaven staff member Fray with Harley. Feeding time was something else! Harley ate a healthier diet than most people, I think—the variety of fruits, veggies and other healthy foods he ate was quite impressive, and, I admit, looked delicious even to me! His favorite treat, though, was red apples, and every morning Gail would go out and feed him one for the day.

Over the past few years, Harley has slowed down very gradually. In early June I sat and offered Reiki to Harley and felt him saying goodbye to me. Felt that he was ready to let go. Although it was another 6 weeks before he passed, I think he was beginning the journey to transition already back then. But even in that weakened state, his energy was so peaceful, so gentle, so loving.  Ready for whatever challenges the future held.

Countless Reiki students over the years have practiced Reiki with Harley—for some students it might have been their first Reiki treatment ever, or at least their first ever with a pig. And over and over again they would describe the feeling of joy and happiness that they experienced while connecting with him.

For this pig, whose energy was bigger than life—it’s amazing how far he came from being a simple 4-H project meant for slaughter at age 1, to becoming an 11 yr. old Reiki teacher who touched so many lives, an animal friend to so many.

Thank you Harley for serving as a model for love and joy in this world.  It’s my wish that pigs and humans all over the world can share love, joy and compassion with each other. Let’s create a new vision for the future—pigs as friends and teachers, how about that?