One day in early spring, I walked into RCHS and noticed a cage on a table with a towel over it. Jess, the manager, told me there was a cat under the towel. He had been trapped and brought to the shelter. He was traumatized by the event and the towel was to help him feel secure. He was a long-haired orange boy whose fur was all matted and dirty.

My first session with Jared took place before I even got a look at him. I sat outside the cage wanting to lift the towel a bit and take a peek. I resisted and began offering him Reiki sitting quietly in meditation and focusing on the flow of the energy. I found it a little difficult at first, not being able to see him, but I felt the Reiki moving through my hands and relaxed into the session. 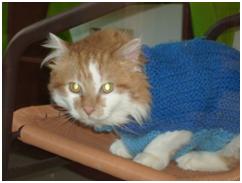 The next time I came in, the towel was lifted on the front end and I got a look at Jared. Because of the condition of his fur he had been shaved and he looked like a little lion! He huddled in the back corner of the cage. The staff thought he was a little embarrassed by his new do. I settled down for the session, careful not to face him directly. I offered him Reiki, letting him know he was in charge of how much he would receive, set the intention and began. I checked in with him periodically, taking quick sidelong peeks. He never took his eyes off of me and seemed to relax a bit.

I was looking forward to working with him again and checked on him first when I arrived at the shelter. To my surprise, he was dressed in little blue sweater. The staff was concerned that without all his fur he might be cold and they put him in a cat sweater. He was adorable! I began the session as before, only this time I sat facing him. He was very receptive to the Reiki and seemed to be coming out of his shell. He came forward, curious about the energy.

We worked together every week, continuing after he had been integrated into the cat room. Naturally, the introduction caused him some stress and he continued to be shy with the other cats. He enjoyed Reiki when I offered it for a few weeks, although unlike other cats, Jared wasn’t likely to get in my lap in those sessions. His hair was growing back nicely and he seemed to be gaining confidence. Then one day he declined my offer of Reiki.

The next week I was told he had been moved next door to the office where he was free to roam the building with another cat. This suited his loner personality, I think. Shortly thereafter Jared was adopted and found his forever home!

Whipper: A Horse That Learned to Trust Through Animal Reiki
September 7, 2020