Last month, I introduced Larry, a senior boxer dog with advanced cancer. Not unexpectedly, Larry has since made his transition leaving behind more lessons for those of us privileged to offer him Reiki. 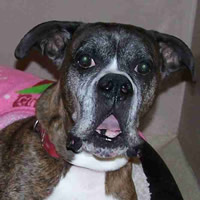 A week or so after my previous post, I was visiting AID as usual. I noticed Larry going outside with another volunteer. Larry loved to go outside in the courtyard between the dog and cat wings. He would “investigate” the area, soak up the sun, and of course, make sure that those coming after him were aware that they were on his territory!

The volunteer took a blanket with her for Larry to lay on. I tended to my “regulars” while she and Larry were outside. After a half hour or so, they came back into the building. I was holding little Lucy, the long-haired Chihuahua, at the time, so couldn’t go over and greet Larry, but he looked directly at me and I got the sense he wanted to spend some time together with me. I resolved to do so on my next visit.

The following week, I asked to see Larry. We had a nice walk around the courtyard after which we sat in the hospitality area and “helped” Lori go through old medications to discard those that were out of date or for animals that were no longer at AID. Larry watched Lori intently while occasionally backing into my hands and soaking up Reiki. His curiosity about Lori’s activities was typical Larry while his acceptance of and even request for Reiki was not. I wasn’t surprised given his “message” to me the previous week. It was interesting how much energy he drew during our session, especially compared to our previous meetings.

Lori and I both knew Larry’s time was coming sooner rather than later and Larry was evidently preparing himself for his transition. As always, he was accepting Reiki on his terms and in his own way. The decision was made to call the vet and have her come out the following week to assist Larry’s journey home.

When I arrived that Thursday afternoon, Lori told me Larry had gone home that morning. It was a beautiful day so they were able to take him out to the courtyard he loved so much and free him from his broken down physical body.

Lori and another staff person reported that Larry was very peaceful and obviously ready to go, demonstrating his awareness of his eternal nature. He knows he will have many more rides on this merry-go-round so he easily accepted the end of this journey.