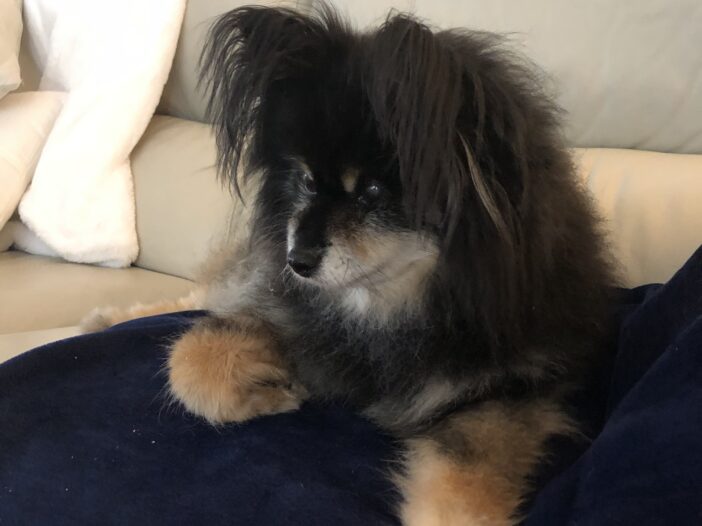 It was a cold day in December three years ago when I first met Skeeter.  I had just moved into my new home and he was the first neighbor I encountered.  That unconditional enthusiasm that only dogs have mastered was evident in his greeting.  He danced, wagged, woofed and jumped in circles in his joy at meeting someone new.

Skeeter had a tough beginning in life.  My neighbor rescued him from the middle of a road where he stood frozen in fear.  She called to him and he ran over to her and jumped into her arms.  She said his relief was palpable.

At the Vet, they learned that Skeeter had heartworm, was not neutered and was approximately 4 years old.  From clues in his condition, the Vet felt he had most likely been used at a puppy mill as a stud, then abandoned to his fate when his services were no longer wanted.

It had been six years since that day of rescue when we met and Skeeter was a happy, healthy, neutered little boy.  A Pomeranian mix, he had a soft, fluffy coat and big waterfall ears, bright eyes and the sweetest disposition.  I fell in love with him, as does every single person who meets him.  “There’s just something about Skeeter” is a frequently heard refrain.  I occasionally shared Reiki with Skeeter during that time, sometimes in person and other times, from a distance.

Then, about three months ago, Skeeter, now around 12-13 years old, developed SARDS (Sudden Acquired Retinal Degeneration Syndrome) which resulted in immediate blindness.  My neighbor worked hard with Skeeter, clapping her hands and buying a clicker so he could move around with some security.  He was making the transition fairly well when it became apparent that other medical issues were also causing problems for this loving boy.  Skeeter became lethargic, showed little interest in anything, although he was still eating and drinking.  It was at this  time that I began sharing regular Reiki sessions with him.

As with everyone, both people and animals, it is important to get their permission to share Reiki.  With Skeeter, I began our sessions by placing my hands near to the front of his face where he could smell me and feel the energy.  When he gave my hand a few tongue licks I took this as his saying he was good with the Reiki session!

When I had shared Reiki with Skeeter before he lost his vision, he let me know that he preferred a “hands-off” approach but with the loss of his sight he “asked” for physical touch. He did this by raising his head or moving his body into my hands until they were touching him, then he would settle down with a sigh.  Our Reiki sessions last about 30 minutes until he lets me know, by moving away, when it is  enough.

After each session, my neighbor says he walks around her home more, expresses interest in going outside and seems able to locate his food and water bowls with more ease. His facial expression is more alert and he is more curious about scents.  He loves his treats afterwards!  Instead of laying “like a limp rag” he rests peacefully and comfortably.

While no one knows when Skeeter will leave us or when my neighbor will have to make the incredibly difficult decision to let him go with her help, his life and this transitional place he finds himself in, are being eased with the help of Reiki.  It’s a blessing to Skeeter and to those of us who love him to be able to help him along the way.