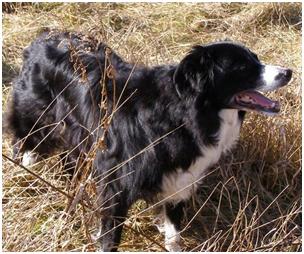 Sessan is a lovely 12 year old border collie. Her companion, Kinna, asked me to work with her this past summer for several reasons. For most of her life, Sessan suffered from skin allergies and, like many of her breed, fear of loud or unexpected noises such as thunder and gunfire. In addition, she had parasites in her throat when she was younger. Kinna has kept her on a special diet to ease her allergy symptoms, but needed help with Sessan’s fear of noises. When Sessan was startled, she would bark, escalating to a point where it appeared she could not stop herself. When a thunderstorm was brewing Kinna would have to sit in the hallway, away from windows and hold Sessan. Often, Sessan would seek refuge in the tub.

Our first session together was interesting. When I arrived Sessan came right up to me and looked me in the eyes as though she knew I was there for her. We had already discussed Kinna’s concerns about Sessan over the phone, so we got right to work.
I settled in to create the healing space by offering Reiki to Sessan, letting her know she was in charge. I then set the intention and began breathing into my hara. Kinna sat quietly in the room with us, guarding the gate she put up so Laddy, the other border collie, stayed out. After a couple of minutes, Sessan put her paw on the gate to get out. Then, she went and lay down in the other room where I couldn’t see her. Laddy, however, stretched out on the other side of the gate with his head on his paws. Of course, when Sessan left, my ego tried to move in. I started to worry about what Kinna would think now that Sessan had walked out. Keeping the precepts in mind, I returned to breathing deeply, bringing in the first symbol and reminding myself that everything was just as it should be. After all, the session was about Sessan, not me. This has happened before in my practice with animals and has taught me to let go of the outcome and trust Reiki.

During the session, a chipmunk distracted Sessan and she demonstrated the frantic barking Kinna told me about. Finally, Kinna got her settled down and we continued working. She remained quiet for the rest of the session. I felt the energy shift after about 30 minutes and closed the session. Sessan immediately came into the room and sat in front of me. I thanked her and Reiki. I also thanked Laddy, who sat fascinated at the gate the whole time. His occasional long yawn and rapt attention let me know he was also receiving.

We set up a schedule for Sessan of four consecutive sessions. Each time I came to work with her she spent less time in the other room. During our second session the sound of a gunshot came from a farm nearby. Sessan lifted her head but did not bark. The chipmunks no longer tormented her. She offered her throat for Reiki during one session. All of our sessions were approximately thirty minutes.

Our fourth and final session together held a surprise for me. Sessan spent the majority of the time in the room with me. As I sat quietly offering Reiki to this lovely dog I had an image of a vast snowy field. When we finished I mentioned this to Kinna. She told me that winter was Sessan’s favorite time of year. She found relief from her skin allergies and there were no thunderstorms!
A couple of weeks after our last session I received a call from Kinna. A severe thunderstorm had passed through the night before. Sessan had remained calm throughout the entire storm!