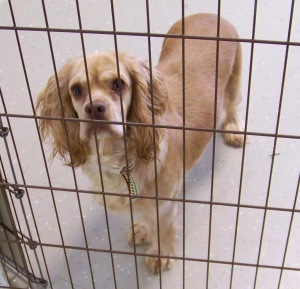 Macy is a beautiful brown Cocker Spaniel with a bit of white on her. She was recently brought to Animals in Distress having just had a litter of seven puppies. One of the puppies had made its transition by the time they got to AID. The other six seemed to be doing all right.

When I arrived at AID for my weekly visit two weeks ago, Lori, the kennel manager, had just left for the vet with one of Macy’s puppies. She returned just before I left for the day and asked that Reiki be offered to the pup as well as Macy and the rest of the litter. In the ensuing week, that puppy made its transition and was followed by three more. The fifth puppy was rushed to the vet shortly after I arrived last week.

I began my visit by asking for Lucy, the little Chihuahua who is one of my regulars. Lucy likes to snuggle in her towel in my arms soaking up Reiki as we make the rounds of the hospitality center and the cat wing. This time, we stopped at Macy’s enclosure and offered Reiki to her and her remaining pup from outside the enclosure.

I performed a healing attunement on the pup and on Macy, as well. Of course, I hope the pup survives, but it is now in the hands of Reiki and the universe. The cause of the pups’ illness has been identified as a herpes virus. According to information I’ve researched, pups contract this virus through the mother who is an asymptomatic carrier of the virus. Most pups who contract the virus do not survive and those who do typically become carriers, as well.

The point of this story, however, is to illustrate yet another situation where we as Reiki practitioners must detach ourselves from the outcome. Naturally, the staff at AID has taken the pups’ transitions hard. They want to save every animal that comes through their doors and it is their dedication to this mission that keeps them going day after day and on weekends and holidays when the rest of us are enjoying family time and time with our own animals.

We offer Reiki to the animals and to the staff and then we must let go and let the outcome be what it will be. This is another example of “getting out of the way” and letting Reiki do what it will do. We never know the “big picture”, so to speak, so we accept that whatever happens is the “right” thing in the eyes of the universe, our personal opinions notwithstanding.

The blessing is that as we learn to step out of our judgments and let be what will be, we are better able to serve the animals and people to whom we offer Reiki. We also find that we become more grounded and peaceful ourselves, which benefits all connected with us.

Update: the 7th and last puppy made its transition the Saturday night after I was there last. I saw Macy today and got the picture above. She’s a very sweet little girl. She’ll stay in the cat wing a short while longer, then move to the dog wing to await her forever home.