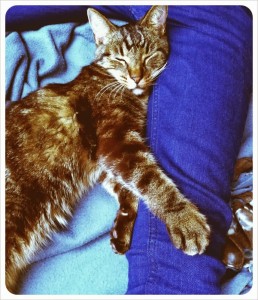 I shared many Reiki sessions with Monk since early July, as he had Chronic Renal Failure.  I had worked with him prior to this diagnosis as well.  He always enjoyed Reiki, and anticipated it more and more as he got to know me.  When he saw me, he would go jump on the bed to get ready to settle in for his session, often sitting on his person Suzanne’s lap for the session.

Late May, Suzanne had called me to cat sit for Monk and his cat girlfriend Jade, and when I saw Monk, I felt so strongly that I wanted to help.  I could see that due to the kidney disease, Monk’s appetite and life force were rapidly diminishing.  I had such a strong sense that Reiki would be of help to him, not to mention that I already had a very strong bond with Monk.  So I began to do Reiki sessions with him very often – every day at times, but at least three to four times a week.

I felt the sessions needed to be often, to continually reinforce the balance, peacefulness and sense of well-being that Reiki can bring. 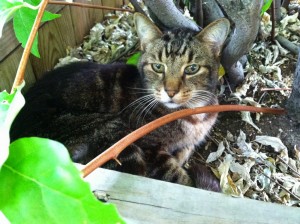 We quickly saw his appetite improve from nearly zero to nearly normal, he began clearly enjoying his food again, and his energy level and general vitality improved a lot as well.  I always offer Reiki energy for the highest good, but one can never know exactly how that will play itself out.

I was so happy to see him feeling better for what seemed to be extra time, time which we had not anticipated him having, time which I know that we all cherished him having, especially his beloved owner Suzanne.  It was such a delight to see the light back in his eyes, to see him prance along with a spring in his step, to see him comfortable and to see him with an appetite.

Monk adored his owner Suzanne, and I felt him wanting to hang on to life as long as he could. And I am glad that until last week sometime, he really was hanging in there strongly, as strongly as he could, Even though his body was frail, I felt such a strength of spirit, of love, of determination.
I treasured the sessions I spent with him.  I will never forget them.  The lovely summer days with him on my lap as I sat on the terrace with the breeze blowing, and later with him curled up on my lapas we sat on the couch.  I knew that I was walking with him on the last part of his road in this life, and it was an honor to be able to spend this time with this very special creature, to feel the very deep connection that happens with Reiki energy with him, to share the light with him.  He had such a pure heart, such pure sweetness about him.  Most often, it felt like my heart was merging with his heart, that our breathing became as one creature, that we were together in the emanating light.  And this emanating light felt like emanating, healing love, like the most pure, beautiful feeling of love that one could have for another creature. 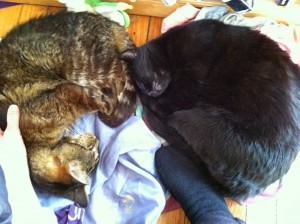 After we began doing more of the sessions inside, sometimes Jade would curl up right next to Monk, and they would take in the energy together.

Last Wednesday, when I arrived, I felt from Monk such a strong feeling.  It was a lovely day with the sun streaming in through the window, a fall day that gives you that rather melancholy feeling of the summer ending and fall beginning.

It was as if he were laying outside in the sun, temperature just warm and so perfect that he didn’t want to move.  That he knew he would have to go soon, but he wanted to stay a little longer, a little longer.  A little longer to feel this beautiful time on earth.  That he knew his time to go was soon, but he wasn’t just quite ready, that he so wanted to enjoy it a while longer.  To feel the connection with the earth, with me in the moment as my hands emanated warmth and energy, with his kitty friend Jade nearby, and most of all with his person Suzanne, who, though she was not present in body during the session, she was and is always with him.

I felt so sad knowing that his time was near, that our time together on the earthly plane would not be much longer. 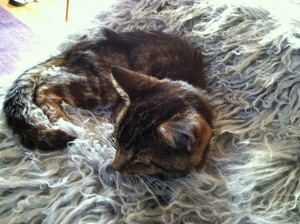 When I left, I made sure he was comfortable, curled up on this lovely shaggy pillow, as though it were a soft form of grass that was all around him.

Thursday he settled into my lap, and it took him a while to get comfortable but then he got so comfortable there, connected with the flow of the energy.  After the session ended, I very gently placed him in one of his cozy places.

Friday I arrived at Suzanne’s place a couple of hours before the vet and his assistant were to come.  As sad as this was, this was a special and powerful time of connection with both Monk and Suzanne.  She held him gently on her lap for most of the time, while I kept the Reiki energy flowing.  I felt him become more at ease as we sat there.  So much love and light surrounded him. 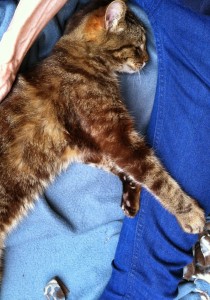 A very unexpected thing happened then.  The first four or five lines of the 23rd psalm came to me, in bits and pieces.  I think it was because I was see the green pastures, then the still waters, then “he restoreth my soul”.  I grew up Episcopalian, but do not really follow any particular organized religion – I am a spiritual person and keep myself open to whatever rings true to me.  But at this moment, the bits and pieces of these lines and the images especially, the feeling of being out in the grass with Monk, the feeling of the soul being restored, it all felt very healing.  I let the images and lines flow through my mind, which eventually led to the image of light all around the three of us, a calm, healing, heavenly light.  We had very quiet music playing, and the door was open to the terrace, with fresh air coming in.

At the end, he was surrounded by such loving energy, it felt like the most gentle, peaceful exit that he could have.  Much gratitude to the kind and respectful vet and his assistant who were present and helped make this transition so gentle.  And the utmost gratitude to Suzanne, for taking Monk in as a kitten and for giving him such love and care for his whole life.  Much, much love to Monk, to Suzanne, and to Jade.  And all my sympathy.  It is such an honor to know you all and to have been a part of your lives.

There is something that I often say to an animal when I am working with him or her, and I usually say it silently.  This is something I said often to Monk (and still say in my mind), “I love you so much, and I always will.”  With those words I feel that the feeling travels over time and space, a love that exists eternally.  Animals help remind us of the feeling of that love with no boundaries, that we can be connected forever no matter whether on the earthly plane or not.

xoxoxo with love and gratitude to Monk, Suzanne, and Jade