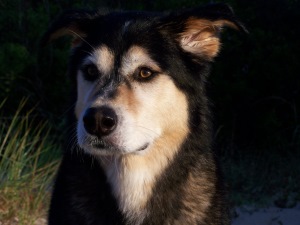 It was late December 2009, a few days before Christmas and the weather forecast was for heavy snow with over two feet of snow expected to fall. This was very unusual for Virginia to receive such significant amounts of snow, so my husband thought it best to gather quite a bit of firewood in case we lost power. The snow was already accumulating and beginning to fall quite heavily.

Our three dogs loved to play in the snow especially our Alaskan Malamute mix, Montana. So I let him outside along with his brother, our Beagle mix, Mr. Bojangles. I kept the youngest, our six month old Pit Bull mix, Tony inside with me because I still needed to watch him closely if he was not inside our fence. Since the gentle snowfall had turned to blizzard conditions and our street was impassable to traffic, I felt the other two dogs would be alright outside of the fenced area playing in the snow as my husband was bringing in firewood.

The dogs were having a wonderful time running and chasing one another and I began to do other things in the house and quit watching them. After awhile I looked out and our dogs were no where in sight. They had left our property and my husband and I became quite frantic. After calling them for quite some time they came strolling back licking their chops as if they had just found the most wonderful delicacy. I thought to myself, I hope they had not eaten anything that would make them sick. I quickly dried them off and brought them inside and they settled down and curled up in front of the fire as the storm outside intensified.

The snow was falling at a rate of several inches per hour and my husband was having to shovel a path from the door every twenty minutes just so the dogs would be able to go out to do their business. I kept thinking how beautiful the snowfall was especially with the lights on the Christmas tree and all of us curled up by the fire enjoying this winter wonderland. This was going to be like a fairy tale Christmas.

Mr. Bojangles had been sleeping rather soundly and began to stir around a bit and came over to me and began whimpering. I was a little concerned with his behavior and then he began to get very sick and was sick on his stomach several times. I knew then he had gotten into something when they were on their snow adventure. I stayed by his side and he continued to be sick. I began to offer him Reiki and he slowly began to feel better and his stomach calmed.

During the time I was working on him Montana came to me and began acting very strange. He has always let me know when he feels bad and always goes outside so he won’t be sick in the house. Not this time. He looked at me as if to say, “Mommy please help me, I am really sick” and immediately he became violently ill. He continued to be sick and was not able to stand up. This was very frightening because it had all the indications of poisoning and my husband and I both had dogs that had been poisoned and died and we knew this was a very serious situation.

Montana became more and more sick on his stomach and finally was not able to stand up at all. By this time the winter storm had paralyzed everything. The interstate was closed because of all the wrecks and travel was at a standstill. We knew there was no way we could get out and try to get help. The emergency vet clinic was closed because of the blizzard and we knew we were on our own. So began a very long night of trying to keep Montana from succumbing to the fate of being poisoned.

Through tears and prayer I began an all night vigil of Reiki on Montana. I stayed by his side all night offering Reiki and holding him in my arms. My husband also began to offer Reiki, his first time working on anyone, since I had just attuned him to Level 1 and 2 a few nights before. What a blessing this was for my husband to be able to do this work for the first time on our dog who was so ill and could die. My husband truly believed that Montana would not make it through the night, yet we never gave up and continued with the Reiki.

Montana would try to hold his head up and stand, but would fall back down on his bed. He became so disoriented that at times he acted as if he wasn’t really with us at all. I wonder if maybe he wasn’t. Yet I knew deep inside my being it was not his time to die. I kept talking to him and telling him to fight hard to come out of this. I told him how much I loved him and that I was not going to leave his side. This dog was my soul mate. He had been with me through some of the most trying times of my life and I was determined he was not going to leave me, not this way. The hours of the night passed so slowly and Montana would just lay there motionless, yet my husband and I continued with the Reiki.

As daylight was breaking Montana held his head up briefly and just looked at me as if to say “what happened Mommy and why am I so weak”. Within the hour he tried to stand, very weak and unstable, yet he stood. He slowly walked down the hall and wanted to go outside. My husband steadied him as he took him out in the still raging blizzard. Montana came back in and ate a few bites of food and then took his place by the fire and went back to sleep for several hours.

As I sat by his side he lifted his head and looked at me and at that moment I could see a change in his spirit. He was letting me know that he was going to be OK now. As the day went on he began to get a little stronger and finally could stand without any help. We kept a very close eye on him all day and through the night again and the next morning he was up early and running out the door to play in the snow with his brothers acting as if nothing had ever happened.

My husband and I know that Montana had ingested poison and should never had made it through the night. We believe that Mr. Bojangles probably did not get enough to really hurt him and had become sick so quickly that he got it out of his system before causing real problems, but Montana probably ingested almost all of it. I am convinced that Reiki cleared the poison from both dogs and brought about their recovery. I know that this was nothing short of a miracle, Montana’s Christmas Miracle.

It brings me such joy as I write this article one year later as Montana sits by my feet enjoying the fire with his brothers– all three boys excited about Christmas and relaxing in the space of Reiki that is such a part of their life everyday now. Our family had been truly blessed by the miraculous power of Reiki!