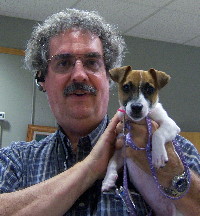 I met Button a few days after she arrived at Animals in Distress. Button is a Jack Russell Terrier who at the age of 8 weeks suffered a broken back when she was dropped. Knowing Button as I do now, I’m sure she surprised the person holding her by wriggling, thereby causing her own injury.

Button was taken to the family’s vet who diagnosed her broken back and recommended that Button be put down. The family was in the middle of their own personal difficulties, but was not ready to give up on Button. They contacted AID.

AID often works with special needs animals, many considered “hopeless”. Button certainly fit that description! She was relinquished to AID and crated temporarily in the cat wing under the watchful eye of Spook, another of AID’s “hopeless” residents. Spook, too, has a broken back and has no use of his hindquarters.

I first saw Button during my usual weekly visit. She was huddled in the back of her crate. After a few minutes, she was able to get up and hobble to her food dish. Her rear legs held her upright, but were otherwise nearly useless. I offered her Reiki for a few minutes then continued to see my other “regulars”.

Button was seen by a veterinary neurologist and got some good news. The doctor said she would likely recover at least limited use of her legs! She was to have cage rest for two months to be sure she didn’t re-injure herself. Aside from that, we were advised to hope for the best.

Button became one of my regulars. I saw her every week for the next several months. At first, I held her throughout our sessions. She readily accepted Reiki and always seemed happy to see me.

She steadily improved to where she was allowed to walk on lead for brief periods. She was unsteady, as you’d expect, but became more active and more agile each week. She progressed from being held to spending our sessions on lead in the courtyard investigating the grass, leaves, sticks, insects and whatever else she could find within the limited area she was allowed to roam.

By the time her cage rest prescription was finished, Button was more than ready to be turned loose! For several weeks she’d been making it very clear that she was ready to boogie and we were putting a major damper on her enthusiasm! I told her to be patient, that I knew she was ready, but she had to humor the humans who were concerned about her.

The neurologist saw Button again and verified her considerable progress, but advised further caution just to be sure. Button begged to differ and looked for every opportunity to show us she was just fine, thank you very much! As you can see from the video below, she had gone from the sad little puppy I’d first met to the happy, energetic little ball of fire that typifies her breed. She had places to go, people to see and things to do!

I continued to see Button for several weeks after she had clearly recovered from her injury. She was much less interested in Reiki, being busy catching up on the time she’d lost, so I told Lori, the kennel manager, that it was time for me to focus on other animals in greater need. As much as I loved seeing Button, she no longer needed me.

I’m happy to report that Button was eventually adopted by an AID volunteer who was chosen from several applications. I’ll always remember Button, the “miracle” puppy, with appreciation and a smile!