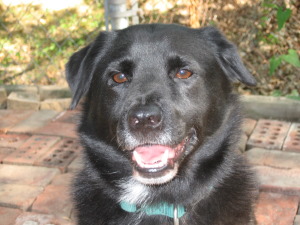 In September 2007, my dog, Blackie, was constantly licking his left forearm, so I took a closer look and there was a three inch cut. I had a flashback that he had the exact same cut on the same arm the previous year, and we had taken him to a vet because it was infected, and they gave me an orange ointment to apply. I remember him shrieking when we put it on, and I was really reluctant to continue but the cut did heal.

I also remembered the vet saying that it was good for him to continue to lick his arm, because their saliva had healing properties. So, for this cut I allowed him to lick, and prayed for it to heal.

The next day, I noticed the area was red and puffy and he continued to lick his arm. The following day, he was losing his hair around it, and his skin was turning black. I figured that I would apply a natural ointment on, and he was very quiet about it.

Late night, I noticed that the black skin was getting crusty. I sadly went to bed thinking “I need to call the vet tomorrow because it’s just getting worse.”

Then, a celestial 2X4 hit me between my eyes and screamed “Do Reiki!” Oops! I totally forgot about that because I had just learned Reiki a month before. I was extremely tired, so I figured that I would do it for a short time.

I asked for Reiki to flow for the highest good, and really tried to stay awake because I was sooo tired myself! After 10 minutes, I kissed Blackie while thanking him for accepting the Reiki, and also apologized for not thinking to do this sooner. I also told him that I will check on him in the morning, and continue to do Reiki for him as well as to call his vet.

The next morning, I remembered to check his forearm, and noticed that his eyes were very bright and shining. I literally fell to my knees because his cut had totally disappeared! Yes, his hair was still gone, but his skin had zero trace of that ugly red, puffy, black and crusty appearance! WOW!! Bless the Reiki energy!

I have never since forgotten the power of Reiki, and to absolutely trust that it will work for the highest good each and every time!