In December I  went to visit my good friend in Montana that recently moved her horse sanctuary to a 1,200 acre ranch.  I was excited for our visit and especially excited to meet Roxanne.  Roxanne,  a four month old filly arrived a week before my visit.  She came to the sanctuary from a neglectful situation and her mother had already weaned her, as she was not able to feed and care for her.

During my stay the temperatures dropped to 25-40 below zero for 5 days.  A small corral was constructed inside one of the barns for Roxanne.  Her adopted Aunt Madison, a retired broodmare that found a home at the sanctuary last year was in the corral outside the barn.  They could still be close to each other and nuzzle through the panel that replaced the door.

One of the many things I wanted to do during my visit was to offer Reiki to Roxanne.  Roxanne was very shy and stayed her distance when I was in the corral helping with the chores.  She would look at me out of the corner of one eye.  We felt Roxanne would benefit from a Reiki session.  I did not have all of my “winter gear”, but I was determined to sit with Roxanne.  My friend gave me a horse blanket to wrap myself in stating it would be warmer than any human blanket she could give me.

It was a cloudless blue sky, beautiful, sunny and 25 below zero day.  It was my last day at the ranch.  I walked out to the barn, turned a bucket upside down, wrapped myself in the horse blanket and sat about six inches from the corral panel.  The sun warmed my back as it shone in the opening of the barn.  Roxanne stayed in the far corner quietly looking at me and most likely wondering what the heck I was doing.  A human in a horse blanket sitting on a bucket outside of her new home.

I created my Reiki space and set my intentions to offer her Reiki and for her to take the amount of Reiki that was appropriate for her.  As with the SARA technique, I allowed Roxanne to participate in her own healing and I remained outside of her corral.  Allowing her the freedom to move around and feel safe in her space.  I began to feel the Reiki flowing through my hands, I could hear Roxanne moving around.  I opened my eyes to see her place her tiny hips and tail a few inches from the panel in front of me.  As she swayed in a gentle motion back and forth.  She let out a baby sigh and began to eat the hay in front of me.  I felt a wave of happiness and excitement that she was willing to come to my side of the corral and showed signs of receiving the Reiki.

The time with her was very magical and peaceful.  She ate for about 20 minutes and then stood in the middle of the corral doing the “involuntary head bob” and letting out deep sighs.  A couple of times she came over and placed her head in front of me and our faces almost touched.  I could feel her warm breath on my face.  As I gazed into those soulful eyes I resisted the urge to reach out and touch the baby soft tiny nuzzle.  I really wanted to climb in there and just hug her, but I did not.  This was about her needs and not my desires.  She had to learn how to trust humans and in the process trust life.  In her four short months on this planet she had already experienced much saddness, betrayal and loss.  I was offering her healing and allowing her to take the Reiki energy to heal herself.

I looked at my cell phone to check the time and realized almost an hour had gone past.  I quietly told Roxanne I was preparing to end the Reiki.  I heard a soft, quiet voice say “not yet”, I could feel my eyes full of tears and a wave of tingles through my body.  I stayed.    I could no longer feel my toes, but surprisingly enough they were the only body part that was cold.  I continued to offer her Reiki and hoped some of the heat I was generating would travel to my toes.

Shortly after the hour I could feel the Reiki flow subside and I knew Roxanne had received all she needed for now.  She looked at me and began to yawn many times and then she stuck out her cute pink tongue and was stretching it in all directions.  I laughed at the antics and the faces she was making.  I knew she was releasing so much.  I asked her what she was releasing and heard “pent up emotions”.  I was happy to see her finally relax enough to release all she was holding in her little body.

I looked up to see Madison standing in the sun with her head against the barn sleeping  next to the opening.  It was such a peaceful moment.  I did not want to leave.  I thanked Roxanne, Aunt Madison and Reiki for allowing us to unite in this incredible space.

I shared the information about Roxanne sticking out her tongue with my friend.  She felt this information made sense with what she had noticed of Roxanne in the few days she had been there.  Before we left the ranch we stopped by to check on the horses.  Roxanne and Madison were standing in the sun half asleep.  We could see the soft nature in their eyes and bodies in total relaxation.  They were enjoying the warmth from the sun, the bond they created with each other and a knowing they are in a safe, nuturing space. 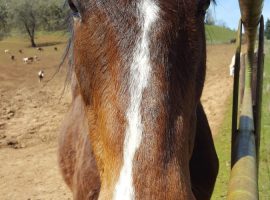 The Power of Reiki Chanting with a Herd 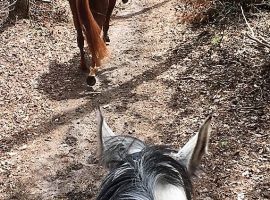