Lions, giant tortoises, herds of wildebeest, eland, kudu & zebra as well as parades of elephants roam the dusty, semi-arid landscape of Addo National Elephant Park. Just an hour east of the coastal town of Port Elizabeth in the southeastern part of South Africa, it seems an unlikely place for any species to thrive. Indeed, it’s the home to the endangered dung beetle. During my visit I didn’t think to offer Reiki to the beetles, but I did have an opportunity to offer Reiki to one animal in need. 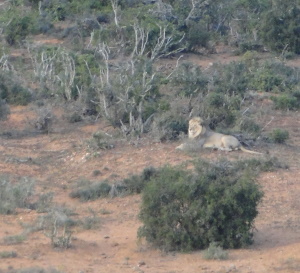 Throughout the Park are posted signs along the paved roads advising – “Do Not Leave Your Vehicle”. While there is one prey species that live in the Park (lions), the rule of not exiting your vehicle is more a case of respecting the wildlife in their home, not necessarily for your own safety. They are used to seeing cars and smelling exhaust, but these are wild animals that have not had encounters with our species. The Park isn’t a zoo or even game reserve – it’s the native habitat for animals that live there. We just happened to have a nice view via the network of paved roads through the Park.

So we were shocked early one morning when we saw three people standing in a wide open desolate area, with not even a shrub nearby. Surely they were Park Rangers we thought from a distance. But as we pulled closer, we saw that these people were not in the green Park Ranger uniform. And there were several parked vehicles in the nearby parking area that was marked as a “viewing site”. The people were splattered with mud and were huddled together talking to each other. 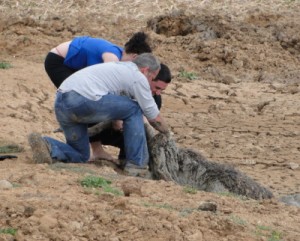 We pulled over and got out the binoculars to get a closer look. They went into action bending over and trying to work at something. They stood up to confer again. Now we could see the long neck of an ostrich, the only part of bird visible. The rest of her body was buried in a mud hole. Again they tried to get traction in the mud as they gripped the ostrich from underneath each giant wing, and it looked like they might succeed as part of the bird emerged, but then it slipped back into the mud.

This was repeated several times but to no avail. The woman in the group ran back to her car and then went back to the mud hole with something. It was a pair of pants, which they put at the base of the ostrich’s neck and then wrapped a leg over each wing.

Ostriches live in herds of 5 or more, so this one had clearly been abandoned. How long had he been stuck? A grown ostrich can weigh anywhere from 150 – 300 lbs. My friend and I debated leaving our vehicle to go help those who were struggling to free the ostrich. I had on sandals so wouldn’t be much help in the mud. I decided to offer Reiki to the situation for the highest outcome for all involved. 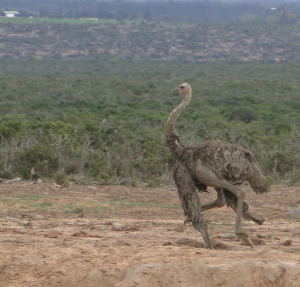 While my friend recorded the action with her camera, I closed my eyes and silently drew the symbols and repeated their names to help me go into a quiet space and focus on creating an energetic connection to the ostrich. I quieted my mind and tried to be open with no expectations, focusing just on the energy and not any desired outcome. I set the intention for the highest good for the ostrich (and the safety of the people) and let go.

After about 15 minutes, my friend shouted “They did it!” As I opened my eyes (and abruptly ended the Reiki session), I saw the stunned bird take her first steps. She took off running a bit awkwardly with her mud-covered wings weighing her down. She was free!

Back at the camp later, we shared the story and chatted with others who had also been watching from their cars. While there was agreement that what the people did was heroic, there was debate about whether it was the right thing to do. Comments about survival of the fittest, interfering with the pristine order of nature, human intrusion leaving no part of the animal world untouched, breaking Park rules, and leaving nature alone were tossed about in judgment.

Unlike this analytical discussion, offering Reiki had provided me a direct energetic experience of the situation where there wasn’t a need to intellectualize it. I realized that there is no separation between “us” as people and the rest of nature – humans are a species of the animal kingdom, we are mammals, we are nature, we are all connected, we are all one.

The experience showed me how the Five Precepts interrelate with one another. Just for today….the individuals who rescued the ostrich weren’t concerned about the consequences of their action (getting muddy, breaking Park rules, being attacked by animals), they were focused on one thing – getting the ostrich out of the mud hole. There was no need for anger at their breaking the rules. There was no need to worry for their safety. They were being true to their way as individuals by showing compassion for themselves (by following their hearts) and the ostrich.

I was reminded of the integration of the Three Diamonds –earth, heaven and heart energy centers. The people were being flexible (not bounded by the imposed rules about staying in your car), yet firm (being practical and using a pair of pants to aid the rescue) and compassionate (taking action on the behalf of another being in need).

I appreciated the opportunity to observe the unique situation and to share Reiki during the rescue. But even more interesting to me is that my gratitude continues to grow as I reflect on the experience. Animals and Reiki – the gifts that keep on giving!