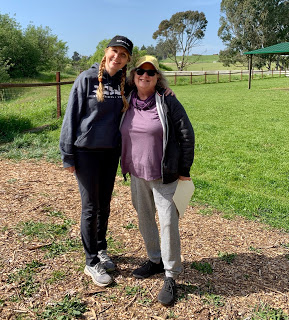 I first studied with Kathleen in 2007 and became an Animal Reiki Teacher and Practitioner in 2008. It was nice to reconnect with her, learn more about her Let Animals Lead® Method (LALM), and share Reiki with the dogs and humans at Lily’s Legacy.

One of the many things I’ve learned from my twelve years of practicing Reiki is animals absolutely understand and recognize Reiki, which means Spiritual Energy in Japanese. In my experience, animals welcome receiving Reiki as long as the animal can choose how they participate in the Reiki session.

LALM empowers animals by allowing the animal to be in charge of how they want their Reiki session to unfold. Practicing this Method creates a powerful healing partnership between the Reiki practitioner and animal. From what animals have communicated with me, LALM is in perfect alignment with how animals wish to be treated by humans.

I’ve studied other energy healing methods for animals including Healing Touch for Animals (HTA), TTouch, and acupressure. These energy systems require physical touch including a vast array of hand positions. When I practiced these methods, animals showed me how uncomfortable they were by quickly moving away from my hands and hand positions.

I admit I felt overwhelmed and confused by the different hand positions as well. Instinctively, something didn’t feel right about forcing my touch onto animals.

A senior Australian Shepherd named Duke was a powerful teacher on how using human hands with animals doesn’t always work well together. Duke’s response to my trying to touch him, taught me how uncomfortable he was with human touch. He also showed me the importance of allowing animals to be in control of their healing space and to let animals choose what’s most comfortable for themselves.

Duke’s person, Barbara asked me if I could help Duke, who suffering from upper respiratory issues, after I became an HTA Level II practitioner. When I tried to touch Duke, he responded by snarling at me. He even tried to bite me when I didn’t heed his warning growls. Duke made it abundantly clear he wanted nothing to do with my hands, my presence, or my looking at him.

To help Duke, I let go of my expectations including touching him. To take the pressure off of Duke, I intuitively went to the opposite side of the room and turned my back to him. I began offering Duke distant healing energy. Remarkably, within a few minutes, Duke settled down next to Barbara and fell asleep. He continued to sleep for the next 45 minutes as I meditated with him.

Barbara was thrilled with Duke’s response and requested more sessions. Given Duke’s discomfort with my physical presence, we agreed distant HTA sessions were the best approach. I did remote energy sessions with Duke until he departed his body over a year later.

I practiced HTA for only a few months as I soon discovered Animal Reiki. While I found tremendous value in HTA, I stopped practicing it because my animal clients consistently showed me how uncomfortable and overwhelmed they felt when I insisted I touch them and not let them move during the treatment.

When I was guided to Kathleen’s work doing Reiki for animals in 2008, I was intrigued. Her awareness of how animals feel about human hands and being pressured to receive healing energy resonated deeply with me. I decided to become an Animal Reiki Teacher and Practitioner, along with being a SARA practitioner, in large part because I appreciated how animal Reiki was practiced and saw how animals responded and recognized Reiki energy.

I’m grateful to Kathleen for her keen insight into how to best to offer animals Reiki. Her LALM truly honors animals as wise, compassionate, and loving Spiritual Beings and masterful teachers.

I’m inspired by LALM because it works in harmony with how animals want and need to be treated when they participate in sharing Reiki and in their relationships with humans. Animals respond positively and organically when we allow them to have a “voice” in their lives and when we work in partnership with them.

Calming the Stress of Coronavirus
March 14, 2020