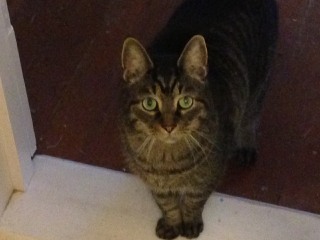 When I walked in to the room to feed the cats, my heart sank when I realized that only Abe’s twin brother, Rudy, met me. Both Rudy and his mother, Zelda, had been quite ill for the past week with a stomach upset. Both had recovered and I had hoped that Abe would escape the illness.

I found Abe sitting quietly in the middle of the room, his back hunched and brilliant green eyes turned inward. I knew immediately that he was now unwell. I went to him and gently stroked him. He enjoyed the connection, but remained motionless and turned inward. 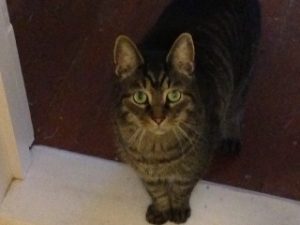 I set the food down, and Rudy now recovered, eagerly began to eat. Abe sat quietly by himself.

Rudy and Abe are 9 years old. Rudy had been an abandoned six month old kitten, who in the middle of a Maine winter, asked if he could come into live with us. His twin brother, Abe, preferred to stay outside. I saw him in the garden upon occasion, but he retained his wild nature and freedom.

When he was 1 1/2, he seemed to begin to tire of the perils of life as a feral cat and would appear on the porch for stretches at a time. I began to put small bowls of food out for him and a warm cat house. He clearly appreciated the gifts, but retained his wild apprehensiveness and mistrust. As the months went on, he did not disappear when I opened the door. I began to leave the door open and he would cautiously enter the house. Finally, one day, he decided to enter the life of humans and to be near his brother.

Abe has never lost his feral nature. To this day, nine years later, he will let only me or my husband near him. He moves through a room with an ancient wisdom, never walking in a straight line, but dodging unseen energies.

I knew I would not be able to give him any medication and so my heart sank when I saw that he, too, now had the upset stomach.

I came back as soon as I finished feeding the other animals and sat down. His brother immediately came over. Abe, more slowly. I began to silently chant HSZSN and felt a warmth in my heart. Abe placed his head in my hands and we sat together for some time. His eyes gazing into mine. Suddenly, I felt a warmth in my heart, and my heart felt as if it would burst. Abe looked at me more intently, then walked away, shaking his head, ears held out to the side. He went into his bed and laid down.

I realized this master had given me a gift and an important lesson. I had been trying too hard. I had wanted to be “The Healer”. Abe, in his feral-ness knew what he needed to do. He knew how to access the Source of All Healing, unlike his more domesticated brother who earlier that week had needed help, had needed a remembrance. Because Abe loves me so and knew my intentions were of love, he met me where I was, but then, at the end, he took me deeper and then let me go. As a mother bird teaches her young to fly.

A few hours later, Abe was stronger. He met me eagerly when I entered the room where he was convalescing. While he still refused food, he was more robust. He gently rubbed up against me and I could feel his love. This morning, he ate eagerly.

Let go of my mind. Be open. Just be love.