The following is a letter from one of the attendees at a recent Animal Reiki class conducted by Bill Stevens. Bill had posted earlier about the first visit to the Popcorn Zoo. This is an account of a return visit by the same two people.

Again I want to thank you for an amazing day at Popcorn Zoo and especially for asking that we be allowed to go into the enclosures to see Princess the camel and the mountain lions!

I know you tried to be with us as much as possible, but I wanted you to get the “inside” story according to me!! 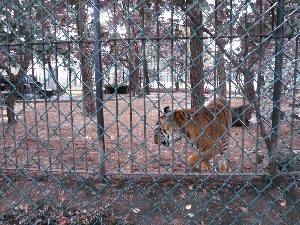 Seeing Caesar the tiger strong and healthy’ still pacing, but chuffing and purring each time he reached the fence where we were standing.  He seemed to rub his face against the fence to let us know how content he was.  He did not mention feeling stressed about the noise of children to M at all this time;

The parrot in the cage at the office seemed sad, but he did not repeat his story about how someone “took” his wing, so he must have understood the last time we talked to him and explained to him that he was in an accident and it was injured and had to be removed;

There were 3 amazing highlights to our visit:

M and I were standing next to the indoor bird cages and she was giving Reiki to the small female white bird.  She said she was not doing well and was taking in a lot of Reiki.  One of the birds in that area was loudly squawking  and we were telling him to be more quiet and that he was going to be ok.  I walked around to the other side of the cages and one of the birds said “hello” – that was a shock because none of them were talking “out loud” before..then I walked around to see the squawking bird and he stopped and also said “hello” to me.  Then I walked around to check on M and the sick bird and she was feeling much better and doing a little dance and also said “hello”.  I was shocked!  M said they talk when I am around. 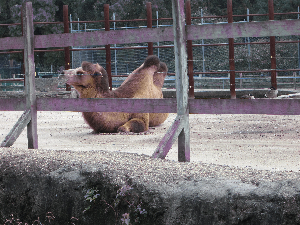 When I went in with Carol to see Princess the Camel I was in awe of her size and a little intimidated!  I have always loved camels and could not believe I was going to see one that close and with no fence!  When Carol walked right up to her I was shocked because I had no idea she actually can touch her!  Princess was lying down with her legs tucked under her and she still was the size of a car to me!  Princess reached up her massive head and began to rub her huge head against Carol’s body while Carol rubbed her.  I stood at a distance and was more than happy to just be there, but when Carol said I could come up to Princess and actually touch her I thought it was too good to be true!  To actually have contact with such a huge, beautiful creature was humbling..that she would actually allow a stranger to touch her.  I wondered if she remembered our animal communication session the last time I saw her!  I told M that if she had stood up I would have passed out from sheer excitement of being that close to her!!! 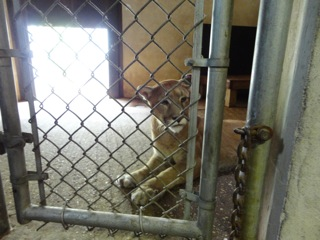 Another highlight was when we were allowed to go into the inner cage of 2 of the mountain lions.  The male (non dominant one) named Lance immediately ran up to the fence where M was kneeling down and began rubbing his face against the fence and making a lot of happy noises,  He immediately began telling her how happy he was and how wonderful it was to be fed and that he is not hungry anymore, on and on..Then the dominant female Gwen came up – she had been hanging back as would be her dominant nature to check things out from a distance at first before approaching.  When she came up to M she did the same face rubbing on the fence, but the male got a little possessive of his conversation he was having with M and slapped the dominant female a few times.  It got a little tense and we backed away.  It was amazing how the male was so happy to be able to find someone who could hear him talk that he was willing to show aggression against the dominant lion!   He kept saying to M “oh, you can hear me?” and then told her how happy he was over and over. 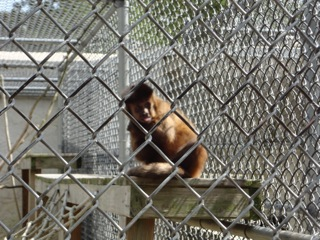 And the 3rd treat of the day for me was Pixie the little monkey!  When we saw her the last time she was shy and told us she did not like children and if we could please throw the peanuts on the top of the cage so they fall down into the cage instead of throwing them against the front of the cage, where they bounce off sometimes and fall to the ground and she can’t reach them!  She was very cute and sweet when we saw her then.  But this time she gave us an amazing gift!  We walked up to her cage and M called her name.  She came running over and really did seem to be thrilled to see us!  So much so that she sat down right in front of us and began to “perform”!  She would raise her eye brows up and down and with her flat top that alone was adorable!!  But she added a little tongue wiggle and placed both of her arms across her chest and stood on her hind legs and did a little dance which included ducking her head and putting it to one side and made a cute little noise.  This performance went on and on and it seemed the more we talked to her the more she played! 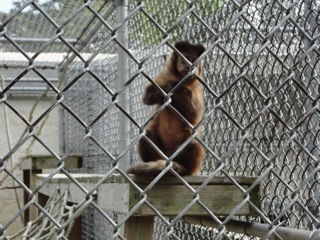 At one point I called Brother Bill and asked him to come over to see her and as soon as Pixie saw him, she stopped everything and turned into a very normal little money and walked to the back of the cage and started grooming herself.  She would not make eye contact and stayed there while we walked away.  Later before we left I walked up to her cage and there was a girl there who was also getting a “performance” and Pixie continued to perform when I walked up so we started talking and it turns out the girl used to work at the zoo and knows Pixie well and continues to visit her when she can.  She said Pixie does her act for people she knows and trusts, so she much have remembered M and I and that was our reward!

There was a sad moment when we were in the kennel and a very sweet looking younger yellow lab with cuts on his face was trying to tell M that a door hit him in the face, but she told me he was actually hit in the face with the door by his owner..  It broke my heart that he did not even know that his owner caused his pain, but I guess that is better for his heart in the long run.  I hope someone takes him home soon…

So again, thank you for allowing us to go with you and your animal Reiki class.  It was a privilege and an honor to be there.