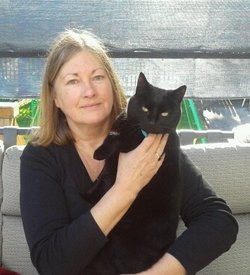 A lovely, beautiful tanned coloured American Pit Bull had just been delivered to the shelter where I volunteered.  She had been found wandering the streets, and the person who found her, delivered her to us.  She was named Chloe and it was obvious “Chloe” had recently had pups but she was in excellent condition.

Unfortunately that week I was too busy to have a Reiki session with her but I worked with her the following week and during this Reiki session I discovered she hated the name Chloe and was, in fact, refusing all attempts at interacting with the shelter staff due to this.  I picked up that her name started with the letter “R” and said this to a lovely New Zealand vet who worked at the shelter then.  She renamed Chloe “Riri”, which was a New Zealand name.  Riri loved her new name and began to interact with the shelter staff.

I had also picked up that Riri had been used as a breeding dog and had continually had her pups taken from her.  The last litter was taken away at birth and disposed of due to the bad publicity American Pit Bulls were receiving in Australia (the breed was being illegally imported into Australia for dog fighting and also a number of children had been badly savaged by them).  Riri was devastated by the loss of her puppies and had been looking for them when found and delivered to the shelter.

I continued to work with Riri and found her to be a beautiful, intelligent dog but she could not stop looking for her puppies.  There was also another, horrible problem.  Riri did not get on with any of the other shelter dogs, in fact, whenever Riri was walked passed the dogs, the other dogs would lunge and bark profusely at her and of course Riri would retaliate.  This was not a good sign and it continued to get worse.  Riri began to lose weight and would sometimes be aggressive to some shelter staff but Riri was always the perfect lady with me as well as the New Zealand vet.

After a couple of months of working with Riri, unfortunately due to her aggressiveness with other dogs/shelter staff and because of her breed, it was decided Riri had to be PTS (Put To Sleep).  This decision is not taken lightly as we try very hard to rehabilitate all animals that come to us.

I was asked to assist in putting Riri to sleep and this I did readily.  Riri was brought from her pen into the clinic and she behaved in such a lady-like manner.  As the injection was prepared, I held Riri and told her what a beautiful girl she was and what a privilege it was to know her as I gave her Reiki one last time.  Very gently she fell asleep while receiving her Reiki, which she loved, and then I “saw” a small, darkish, male puppy come to her.  He was the same colour as her ears and I knew it was one of the puppies she had so longingly looked for.  At last Riri was reunited with at least one of her pups, which is all she ever wanted.  I knew she was finally at peace.  Although Reiki was unable to rehabilitate Riri into a new home, it gave Riri the most important thing to her, her beloved puppy.