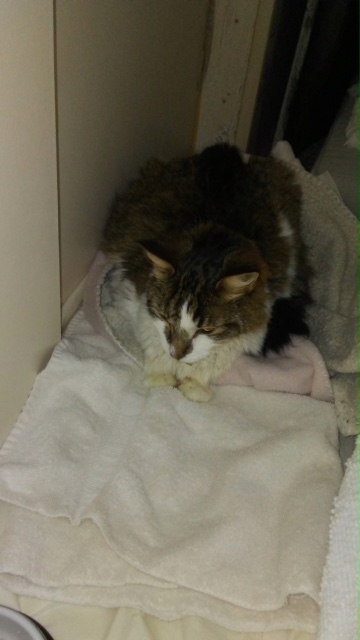 Scotty was a 7 year old long haired tabby. When he was five, his owner surrendered him to the SPCA. The reason given was her roommate had adopted a dog. His surrender papers explicitly stated that he was afraid of children.

Sometime after, a young father of three toddlers, with two other cats at home, came into the shelter to adopt a cat. He chose Scotty and the shelter let the cat go home with him.

Months later, he brought a frightened, emaciated cat…half his original weight, to a neighbor and asked if she would take the cat in. Scotty had been hiding under the bed since his adoption. The lady, who is the mother of a friend, said yes. She made Scotty comfortable and called her daughter. They decided to take the little cat to the vet. While there, my friend called me for guidance. The vet wanted to euthanize the cat on the spot….but Scotty had decided to walk around the exam room and explore. It seemed premature. My friend and I talked and came up with a plan that she could take the cat back to her mother’s and see if they could nurse him back to health. Unfortunately, the vet was very heavy handed with the medications that he gave the frail cat before leaving. By the next morning, little Scotty began vomiting.

They kept him comfortable, stroking and talking to him. Offering food and drink. He settled down in the evening and fell asleep. I offered him Reiki from my home. Making it clear that it was an offer of Love. It seemed to me that the energy I sensed that night, from him, was preparing to slip through the veil. The next morning, they found he had passed away quietly- still in the peaceful position they had left him.

My friend called to tell me. I suggested that perhaps they place flowers around him and bury him in her pasture with the other animals she has cared for and crossed over. That is what she did.

Where was the Reiki in this? It was everywhere. Scotty did a lot of teaching in his last days. He showed my friend and her mother that every moment in our lives matter….even the very last ones. I didn’t specifically speak about Reiki as they are not familiar with it- but I spoke from the Precepts. Do not anger. Do not worry. Be grateful. Be diligent. Be compassionate to yourself and others. My friend will go to the shelter and tell them what happened – not to judge or condemn but to teach. And her mother will speak to the young couple – again to teach, not to judge or condemn.

Scotty’s gift to me was to see that it is important to look into one”s heart and live the Precepts…..whatever one calls it doesn’t matter. And that in this world often marked by ignorance and suffering, that Love is most important.