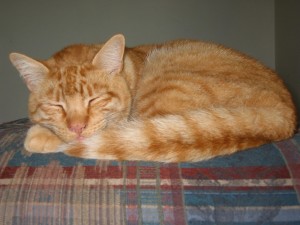 Oliver is a very handsome, loving, orange tabby cat that I have known for about 9 years. He is the animal companion of one of my best friends and her family. When Oliver first joined the family there was just two human children. Now there are four and they are all boys. The two oldest boys are 12 and 14 and the youngest are 2 and 3.

About 2 years ago my friend called me to ask if I could offer some Reiki for Oliver. She said he had started having some significant behavior changes. He was going to the bathroom in the house outside of his litter box. Specifically, he was doing this in the bedroom shared by the two youngest boys. Oliver had also become very grouchy and would bat at the little ones (luckily without his claws), and would bite and claw at the parents and two older boys.

I started with an in-person Reiki session and followed up with a distant Reiki session a few days later. During the distant session I got an image of one of the little boys’ faces right in Oliver’s face being very boisterous. It was very clear that Oliver was very distressed by this. While offering Reiki I focused my thoughts on peace and harmony.

For about a month Oliver stopped these unwanted behaviors and became very loving with the whole family. After that month though, Oliver reverted back to being grouchy and going to the bathroom in the little boys’ bedroom again. I went over and offered another in-person session followed by a distant session. This time he went two months without a bathroom incident and he actually became so loving that my friend jokingly asked if I could possibly back it off a little.

When my friend called again after the two months it became very clear that since we could not get rid of the root cause of Oliver’s stress (the two boisterous little boys :), that Oliver would just need regular Reiki maintenance. So about every 3 to 4 weeks I offer Reiki to Oliver. I am happy to say that the unwanted bathroom behavior has stopped and he just tends to get a little grouchy now and then.

Oliver has been a wonderful teacher. One of the lessons I learned from him was about being heard and not giving up until you get what you need. Once Oliver got what he needed, he was able to transform how he interacts with his family. I am so grateful to be a part of his process.