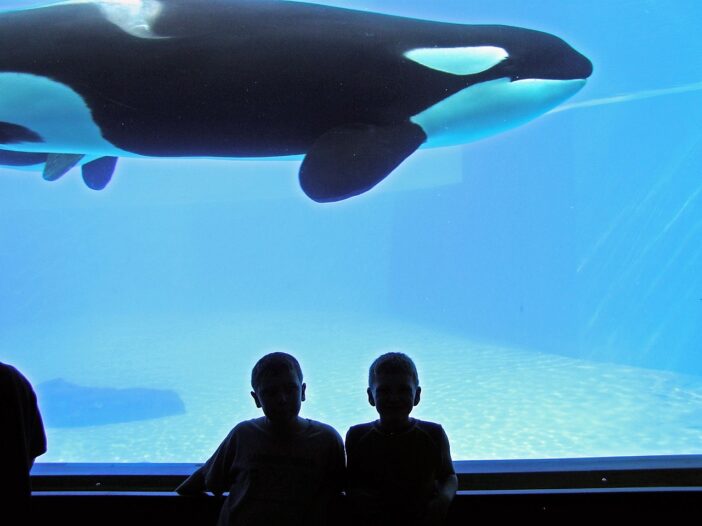 Long before I heard of Reiki, or Animal Reiki, I had a unique experience with a magnificent animal and it wasn’t until I recently took a course with Leah D’ambrosio did I realize it was a genuine Reiki experience.

A good friend of mine came to visit me in Vancouver. One of my favorite places in the city was the Vancouver Aquarium. At that time the Aquarium still had Orcas. Visiting the orcas was always a bittersweet experience for me as I found it sad to see the whales in captivity. In my opinion, the aquariums could never build an area big enough to hold such a brilliant animal, yet to see the whales up close and personal was also an experience of a lifetime.

The Vancouver aquarium had a viewing gallery where you could experience the whales in close proximity as they swam in the giant concrete tank that was their home. I suggested to my friend, who had never been to the aquarium, that we visit the whales.

It was midweek so the aquarium was not crowded and as we walked down the ramp that takes you to the viewing area for the orcas, I was mixed with excitement and sadness as I knew, as always, I would feel sentimental as I left the aquarium that day. As my girlfriend and I watched the whales swimming in the viewing area, I noticed out of the corner of my eye an indigenuous woman holding a book on the glass of the viewing tank and in front of her was an orca close to the glass and it looked as if he had his eye on her book. The woman held the opened book up against the glass for several minutes and the whale would swim a few inches above her and she would turn the page and then again hold the book up against the glass. It looked like the whale then moved back down a few inches and was in a position to eye the book.

I watched the woman for quite a while and my curiosity got the better of me, so I walked up to her and asked what she was doing. She called the whale by name, and told me that she was sharing a picture book about whales in the wild and that the whale enjoyed looking at the pictures. I remember laughing and saying to her, “I don’t believe that he is looking at the pictures in the book.” The woman then said to me, “watch closely and then tell me if you don’t believe me.”

The woman then picked a page and placed the book against the glass. This time I was standing right next to the woman and I had an up close view of the whale. As he started to come down to the book, I was astounded when I realized that his eye was indeed scanning the book and not only did he scan the page once, he scanned the page several times. The woman then looked at me and said “he will tell me when he wants the page turned.” At this point, I was speechless and even if I wanted to say something, no words could be found because I could not believe what I was witnessing.

Sure enough, when the whale finished scanning the page, he then raised up above the book and the woman said, “he has finished scanning the page and wants me to turn to another page.” She then took the book off the glass, turned the page, placed the book back on the glass and the whale came back down and his giant eye scanned the next page for several minutes. I watched this whale for what seemed like ages, with tears in my eyes, as he scanned the book. When the whale swam away, the woman showed me the book.

The book was full of beautiful pictures depicting whales in their natural habitat all through the west coast. My girlfriend was also watching, and said “oh my God I can’t believe what we’ve witnessed.” The woman then told me that she came to the aquarium every day and tried to bring different books. She said she came to keep the whales company, to sit with them, meditate and hopefully give these beautiful beings peace and comfort.

In the Reiki practitioner course with Leah, we discussed being present with an animal no matter what the conditions the animal was in. I realized that this woman that I had witnessed with the whale all those years ago, had been just that, she was a presence and a comfort for that whale and I now thoroughly believe that she made a difference to that whale in his captive state and brought him a little peace every day.

In 2019 Canada’s parliament passed legislation that banned whales, dolphins and porpoises from being bred or held in captivity. The legislation had an exception and that was that marine animals already held in captivity would remain in captivity for the rest of their natural life. Today, MarineLand in Niagara Falls, Canada has one orca and 50 belugas in their facility.

Worldwide there are over 3000 marine animals held in captivity and 56 of them are orcas. The public is now knowledgeable of the conditions in the facilities in which these animals live. Consequently, there has been a push for whale and dolphin sanctuaries; “whales without walls.” Scientists have found that it is easy to capture whales and dolphins but it is almost impossible to successfully release them back to the wild. The first sanctuary in North America will be ready in 2023, and is located in Nova Scotia, Canada. A short video about this project here: Whales without walls