Imagine standing next to a horse, and immediately being led to place your body into a Mountain Pose. Meeting Joe Black for the first time, this is what I did with my right hand placed on my heart and my left hand placed above his shoulder. During this Mountain Pose, the word “Yogi” came to mind.

Joe Black is a beautiful nine year old black Percheron who was rescued by Changing Leads Equine Rescue, just days before I came to offer him Animal Reiki. His presence commands respect, even though he’s 600 pounds underweight.

After I had introduced myself, I sat a short distance from him because he was still eating his alfalfa cubes; I wanted to give him space. After thirty minutes of offering Animal Reiki, my heart did a little leap when this gentle giant walked over to sniff my hands. Afterwards he slowly pivoted and walked a couple of slow laps around his hard turnout.

Soon I heard telepathically “Do yoga” from him. Aside from being surprised, I thought to myself that would be really weird to be doing yoga in a horse’s turnout, as well as there were several people around the place that could possibly be watching. I telepathically told him, “uh…no….not going there.” He replied gently, “Ok. That’s fine.”

I caught myself thinking curiously ….what does this being know about yoga? Forgetting about my surroundings, I jumped up asking telepathically “Ok, I’m game! What pose?”. He flashed me pictures of one doing the Sun Salutation. I telepathically said, “uh…we’re on gravel…can we compromise?” He then flashed the beginning sequence of a Sun Salutation: Mountain Pose, Upward Salute, Standing Forward Bend, Standing Half Forward Bend, and back to Mountain Pose. I happily replied “I can do that!”

As I was doing the poses, he came and stood near me, breathing in the Reiki. I literally felt his breath on me throughout the first round. 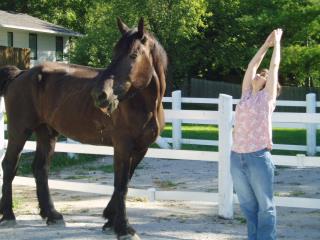 (During this Upward Salute, Joe was licking his lips which is a sign of him accepting Reiki.)
After the first round, he wanted Reiki focused on his heart space with my left hand for several minutes. Again, I followed his request. 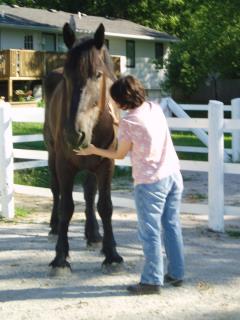 When he had enough, he slowly walked off into a corner and went into a “Reiki nap”. His body completely relaxed by lowering his head, closing his eyes, licking his lips, and snoring from time to time. 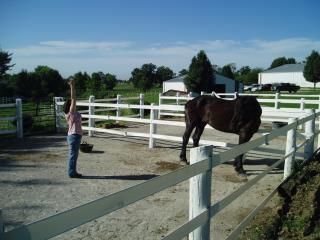 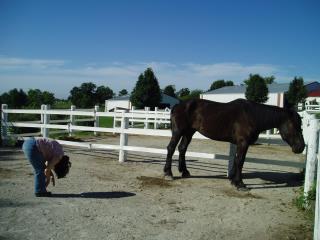 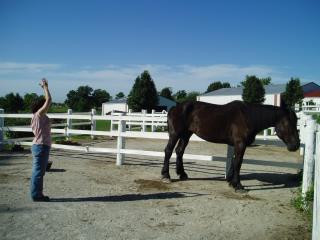 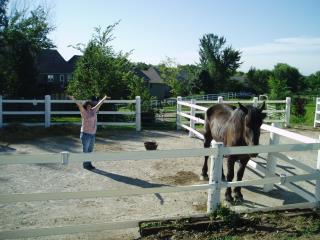 Anytime that I took a rest, he would wake up, turn his head to me while licking his lips all the while saying “Continue.” 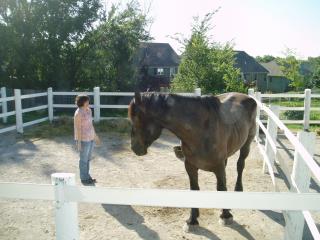 (Look at all of the amazing orbs!)
After about thirty minutes from doing these poses, I heard him say “Now twist”. Again, he flashed me a picture of what the pose was and I obliged. 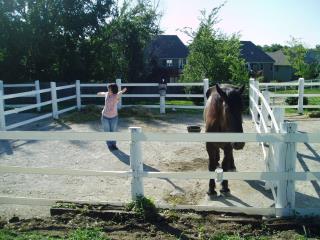 He continued to lick his lips as he stood with his eyes closed. After two minutes of twisting, he said “Warrior”. When I stepped into the Warrior pose, he opened his eyes and turned his head to look at me. As we stood looking into each other’s eyes for several minutes, time stood still as we experienced a transcendent release from our lives. He thanked me and told me he was finished. After I had thanked him and Reiki, I wondered to myself….who helped whom? 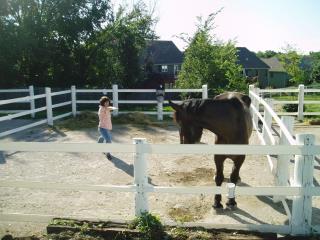 On further note, I discussed with my yoga teacher later that evening to find the deeper meanings behind the poses. Mountain Pose is bringing awareness of one’s aliveness. The beginning of a Sun Salutation which leads to the Upward Salute is opening oneself to the divine energy to flow within. Standing Forward Bend is bowing down to Mother Earth’s energy, and then Standing Half Forward Bend is to open one’s heart space to receive this energy. The twisting pose further opens up the heart space (heart chakra). Warrior represents strength, which leads back to my question….who helped whom?