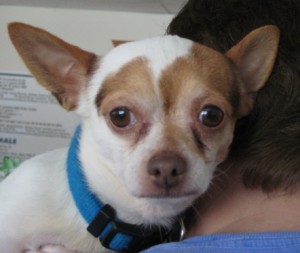 Recently, I had the honor of working with a lovely little Chihuahua named Billy. He had been brought to Rutland County Humane Society after roaming the streets for a while. The staff thought he was around 8 years old. When I met him he was lying in a little bed on the floor of the front office recovering from surgery. He had been to the vet to be neutered and he also had dental work done.

I started off in a chair across the room from him. I wanted to be sure he had plenty of space and wasn’t threatened by me. He looked weary. With his little head on his paws, he kept an eye on me. I spoke softly to him, letting him know about Reiki and what I was offering. I also told him he could choose not to have Reiki if he wished. I set the intention and began Joshin Kokyu Ho. I felt Reiki expanding from my hara almost immediately. Apparently, so did Billy. He looked up at me then gingerly got to his feet and slowly came over. He put his paws on my leg, stretching up to get a better look at me. I felt it would be okay to sit on the floor with him, so I slid out of the chair and sat on the floor in lotus position. 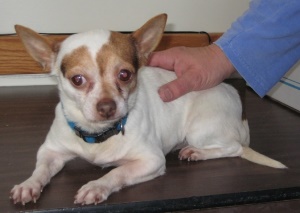 Billy immediately got in my lap. We sat quietly together with the Reiki flowing. I was touched by his big eyes and trusting heart. Billy sat happily in my lap for more than a half an hour enjoying his session. Eventually, I had to end the session as I had others waiting for Reiki. I told Billy we had to stop, thanked him and praised him for being so open. Then, gently, I lifted him and put him on the floor beside me. Before I could get up Billy backed up to me, put his hind legs on my thigh and pointed his butt up at me as if to say, “I need Reiki here too!” I chuckled at his insistence and agreed to continue Reiki for the area of his neuter surgery.

The following week Billy was still at RCHS when I arrived. He was again in the front office with the resident pit bull, Tsunami. Billy was happy as can be and not the least bit intimidated by Tsunami whose head is about the size of Billy. Tsunami gave Billy a big lick nearly knocking him off his feet! It was entertaining to watch! When I began with Billy’s session he came right over and sat in my lap for most of the time. When I arrived the next week I discovered Billy had found his forever home!