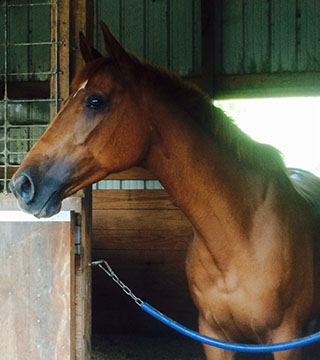 Some years ago, my young, chestnut, off the track Thoroughbred mare (you horse people get it), was just home from colic surgery.  It was day one of 30 days stall rest, with five-minute grazing sessions throughout the day.  She had many complications and was not out of the woods. I was an emotional wreck.

Day one, first graze, Never Tell was unmanageable – rearing, bucking, dancing and snorting.  I tried a small outdoor panel enclosure, thinking she would graze.  Nope, just about demolished the panels.   I had visions of burst stitches, guts spilling out, and every other imaginable horror.  Sedatives were not an option because they affect the digestive system.  So…I put her back in the stall and cried.  How were we going to get through this? What if she hurts herself?  What am I going to do? What if I lose her?

The phone rings and it’s Trixy.  Through snuffles, I fill her in.  “Would you two like some Reiki?”, she asks.  “Sure!”, I said, not quite knowing what to expect.  She said to give it about 20 minutes and try again, she would be sharing distance Reiki with both of us.  Not sure what that is, but I’ll take it, I thought.  I had a vague understanding of Reiki at this point and knew Trixy had recently taken a Reiki class.

As I waited, I began to feel calmer and Never Tell settled in her stall.  I led her out and she was animated but she grazed without incident. Just WOW!

I thanked Trixy and she said if I would give her a heads up before each grazing, she would share distance Reiki with us.  We followed this routine for several days without any blow-ups.  Then I decided to try it without Reiki.  Back to bouncing, rearing and snorting.  A plea to Trixy, Reiki to the rescue!   Out we go, quiet and sane. Lesson learned.

For the duration of stall rest and the limited activity period after, Trixy continued to share distance Reiki and we survived without incident.  I felt calmer, less worried, and was better able to support Never Tell in her healing process.  I sensed Reiki energy was helping both of us heal from the trauma of colic surgery.  I had to learn more.  I decided as soon as I was comfortable leaving Never Tell for more than a few hours, I was taking a Reiki class.  And my Reiki journey began.

It is said Reiki finds us when we need it most.  I know Reiki found me when I needed it most and has changed my life for the better in so many ways.